Movie Adventure: Beauty and the Beast in 3D 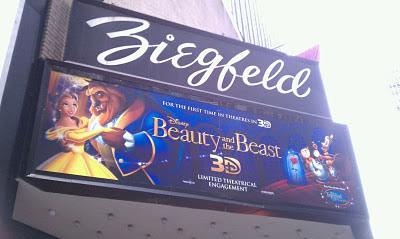 I couldn't resist seeing the re-release of Disney's Beauty and the Beast on the big screen, this time in 3D.

It wasn't as if I was revisiting it since I first saw it so many years ago in Austin, Texas, but it was lovely to see it on the huge screen and hear the glorious score again. Clearly, animation has changed a lot since its initial release in 1991, but I still prefer the realistic look of these drawings to some more recent renditions (i.e. Tangled, in which the heroine's eyes look freakishly large). The 3-D effects weren't as bold as some of the recent movies I've seen, but they added texture to already lovely scenes, especially the "Be Our Guest" production number and Belle in her yellow ball gown.

For me, Alan Menken's score is still the most exciting factor in what sells this film. It was wonderful hearing it in dazzling suround sound. I loved hearing Jerry Orbach (and seeing his likeness) as Lumier and was reminded of how much we lost when he passed away. It was wonderful hearing Angela Lansbury as Mrs. Potts again as well. I remember watching it for the first time and realizing what a beautiful voice she had; I was a fan of Murder, She Wrote, but didn't know her other work at that time.

At the showing I attended at the Ziegfeld Theatre, which is one of the last of the glorious movie houses of New York City, was full of children of all ages. There were a group of young women sitting behind me that wept through the end, and for once, it didn't bother me. It's still a beautiful story told in gorgeous portrayal and I have to admit that even I teared up just a wee bit.

It seems to be running only through January 29th in New York City and I'd go again if only I had the time. Alas, I'll just have to settle for dvd or via iTunes on iPad.