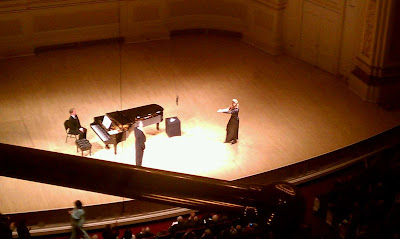 Save for the peekaboo slit in the bodice of her dress, Susan Graham was dressed like a virginal angel for the first half of her Carnegie Hall concert on Wednesday night.

For the second half, she left the angelic backstage.  Susan vamped onstage in a clinging, shimmering black gown, dripping in Vendura jewels.  The gown hugged all her curves and the audience catcalled and whooped it up for her.  This only encouraged her to show off her sexy side even more, practically whipping the audience into a rowdy frenzy.   Things were about to get out of hand after one excited gentleman shouted out, "You look beautiful, Susan!"   She responded in kind, but then let him have it with "Enough," after he boldly shouted out his demand for "A Chloris."

All of the songs Susan sang, accompanied by Malcolm Martineau at piano, were all about women. She sang in German, Russian, French, and English.  The songs portrayed the various emotional state of these women, in their sadness, loneliness, despair, then fierceness and even madness.  So much tragedy!  So much beauty.   One set of songs all drew from Goethe's Mignon.  She sang Joseph Horovitz' Lady Macbeth - even in recital, in her shimmering black gown, she acted this piece as if it was a full blown production.  What a thrill it was to hear her sing Duparc and Berlioz, but especially a set of Poulenc, Fiançailles pour rire, the final set of her announced program.  I could listen to these all day long.


In a final set of selections announced from the stage, Susan really started having her way with us.  She made me very happy when she included J'ai deux amants (Andre Messager, from L'Amour masque, 1923) - it's on her C'est ca la vie, c'est ca l'amour album which makes me dance around my apartment.   She also included a Cole Porter piece and another from Vernon Duke, proving that she's just at home in American songbook as she is in French rep.   She closed with the hysterical Sexy Lady, which was written for her by Ben Moore for her debut at Carnegie nine years ago and which chronicles her lament of being a mezzo trapped in pants roles.

Fortunately, in an encore she finally gave us what we really wanted, our favorite and hers, A Chloris by Reynaldo Hahn.   I daresay it's her signature song. The last time I heard her sing it live, unbelievably five years ago at Carnegie Hall, I thanked her for singing it and she told me that nobody loves it more than she does.

Her final encore was The Boy from ... by Stephen Sondheim and Mary Rodgers from The Mad Show.  Susan is known for her comedic styling and she didn't disappoint here.   But, it sure was fun to see the sexy side of Susan too.    It will be too long until we see her again - at the Met Opera next season, probably in Les Troyens.

Photos poached from Bill Madison's review of the recital on Billevesées  (and yes, backstage I believe I witnessed kiss he speaks of, although I didn't realize it was him): 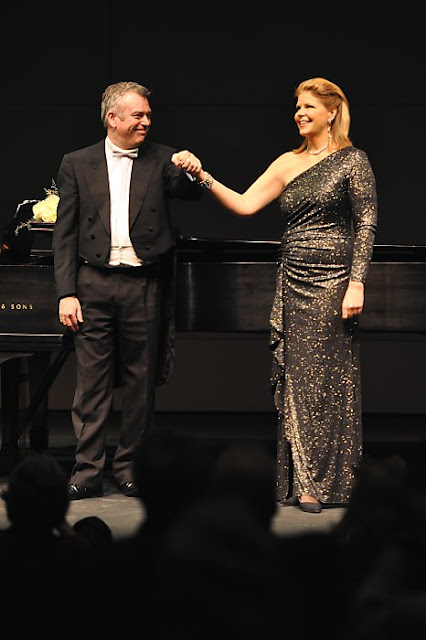 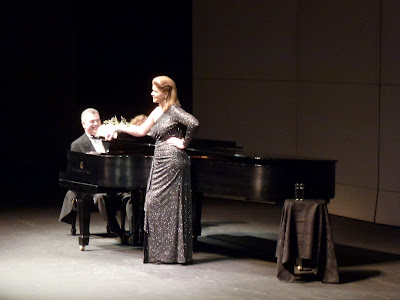