Go to TimesTalks' face page to watch the archived livestream of Julia Louis-Dreyfus from February 13th.    Kari and I were there in person. On the front row.

Julia's "Elaine" is one of my favorite characters ever.   I loved learning that "Elaine's" hairstyle in the early years of Seinfeld was inspired by her own love of Helena Bonham Carter in A Room With a View and wore it curly mainly because when she was a regular on Saturday Night Live, she was discouraged from wearing it curly.   Her work on Saturday Night Live actually got her the Seinfeld job because her former colleague Larry David, the co-creator of Seinfeld, called her up after NBC told them to get a girl for the show.  She said that her favorite episodes of Seinfeld were the ones in which she had a hard time getting through because she was laughing too much and described the one in which "Kramer" sets up the Merv Griffith Set in his apartment.   Yes!  One of my faves, as well.

Julia says, "Look it" and "Yeah" just like "Elaine."  She also inspired "Elaine's" signature "Get out."     I also loved that on top of her humor, she is really a beautiful woman.  Wow -she's a knock-out!

When you watch the livestream, at 1:23, she is telling a story about running into "Vincent" from Seinfeld at a party for VEEP.  I audibly gasped and she looked right at me and responded, "Yeah."   It was awesome!

Julia will be playing the Vice President in a new series called VEEP , which begins this Sunday on HBO.  Yes, I subscribed just for this show.   I can hardly wait! 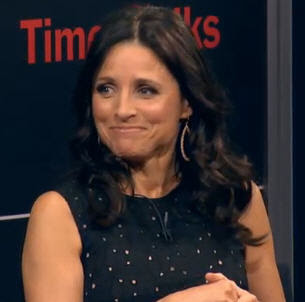