I love this album: Ah, Men! The Boys of Broadway by Betty Buckley 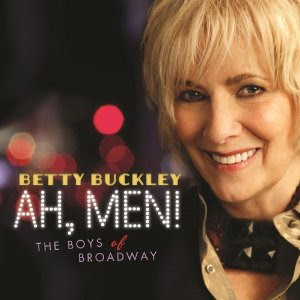 I knew I would love this new album from Betty Buckley the minute she announced that she was recording it and naturally, I was right.

I had the opportunity to hear this  repertoire from Betty live several times, both at Feinstein's and B.B. King's and I fell in love with her interpretation immediately.

Betty's conceit is that she's performing songs normally performed by men in musical theatre.   When it comes to Betty, she can sing anything and this repertoire works as good, or even better, as any for her.

The song list is "I Can See It" from "The Fantastics," "My Defenses Are Down" from "Annie Get Your Gun,"
"Jet Song" and "Maria" from "West Side Story," "I Won't Dance," from "Roberta,", "Venice" from "Elegies,", "Luck Be a Lady" from "Guys and Dolls," "Song on the Sand" from "La Cage Aux Folles," "Come Back to Me" from "On a Clear Day You Can See Forever," "Hey There" from "The Pajama Game," "Sweeney Todd Suite: Not While I'm a Around/Johanna/My Friends" from "Sweeney Todd," "Corner of the Sky" from "Pippin, " and "More I Cannot Wish You" from "Guys and Dolls."   Additionally, there is one perfect tongue-in-cheek original number, "Hymn to Her" written for Betty by Eric Kornfeld with music adapted from"My Fair Lady" by Eric Stern.

I am fond of every number on this album, but in particular the "Sweeney Todd Suite."  I cannot listen to it without  becoming completely transported.  Some producer should jump on this and produce her as a gender-bending Sweeney, stat.   It wouldn't be her first time to take on a trouser roll;  after all, she was "Edwin Drood" in "The Mystery of Edwin Drood" on Broadway.   I consider myself a bit of a Sweeney specialist, given the number of times I've seen various productions, and I know a Sweeney when I see/hear one.  Just imagine Betty's "Epiphany."  Good Lord, it would be so epic....

The set is absolutely superb.   Betty is a master song interpreter; she doesn't just sing a song but inhabits it.  The result is a mini dramatic, or even comedic, performance which each piece.  Listening to Betty's work is nothing short of satisfaction guaranteed.  You can put it on as background music, but believe me, you're going to stop what you're doing and pay attention and join Betty right in the midst of each song.

Backing up Betty on the album is a group of fantastic musicians.   Christian Jacob, who has been joining Betty as of late in her live gigs, not only accompanies on piano, but also shared his deft hand at arranging all of the pieces (except "Maria," which is co-arranged by Jacobs and Eric Stern).   Joining the session band were Peter Barshay on bass and Matt Betton on drums. The resulting sound is a sultry mix of classic show tunes and jazzy standards.  It's all reminiscent of the great girl singers of yesteryear.

Lucky for us, Betty will be back at Feinstein's at the Regency with a whole new repertoire "The Other Woman – The Vixens of Broadway," beginning October 2nd and closing on October 27th.  I can hardly wait for her to bring it!

The album is available electronically via Amazon and iTunes, but this is a good album to own as well. The liner notes are gorgeous.   Shots of the recording session are included, as well as some gorgeous photos of Ms. Betty Lynn herself.   She also shares her own fun facts of what attracted her to the song in the first place.