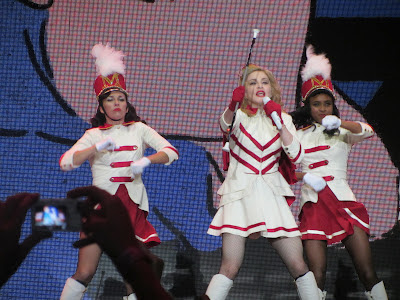 Yesterday, I woke up to an email from my friend Kyle inviting me to see Madonna with him.  He already had a purchased ticket, but won an upgrade and a guest invite via Twitter.   How could I not take him up on the offer?   I've loved Madonna since I was...well, since 1983 when I heard "Holiday."  I had never seen her perform live, although I've seen all of her videos, movies and concert documentaries.

We arrived at the Yankee Stadium early to discover that we were in the Golden Triangle section - it's an area that is surrounded by the stage and the two catwalks.  I think there may have been around 300 people in the section - it was comfortable enough to dance and not feel crushed.   My friend and I stayed by the catwalk and always had a great view.  Madonna and her dancers spent ample time by us.  I was awe inspired by their physicality, skill and sheer energy.

Madonna's show started at 10:20 and ended at 12:10 pm.  It was one of the most dramatic openings I've ever seen on a stage, hands down.  The show was divided into four acts, each featuring multiple themes and costumes.   It was all dark and delicious, except for the "Express Yourself" section which was just pure fun - I have never seen an entrance by a marching drum line in such a matter.   Wow!

I was expecting a raunchy and overtly sexual show, and the sex was there, but she brought a deeper message.  The imagery, especially at the beginning was dark and violence was often prevalent, but it seem to fit and I felt like she was preaching about choices and anti-violence.   She took time to talk about visiting so many countries on this tour where she witnessed bigotry and oppression. She said she was so lucky to live in America where we're free.   She riled us up and made us promise never to take our freedom for granted.  She also endorsed President Obama by saying, "Thank God for Michele Obama and her handsome husband too."  Furthering her point, she showed us her OBAMA stamp on her back.   Click here to see amazing video proof from a fellow concert-goer.

Most fun of the night was "Express Yourself" where Madonna dressed majorette and the dance girls and boys were dressed up like a  marching band.   It was so much fun.   Musically and most heart rending, the best of the night was "Like a Prayer."  I have never felt like I did when Madonna came by me and then we heard the sound of 50,000 people cheering and singing along.  It was a most awesome feeling.  I thought I would cry at one point.  My friend Billy Boy was there as well and he said he saw me on the big screen.  I'm sure my mouth was wide open in awe.  It was all so thrilling.

Madonna is 54 years old.  I can't get over how she was not just dancing, but leading the way.  It was the most physical display I've ever seen and definitely inspirational.

And I pretty much can't believe I was there.  Click here to see more of my photos from the evening.

The set list: Prayer, Girl Gone Wild, Revolver, Gang Bang, Papa Don't Preach, Hung Up, I Don't Give A, Best Friend, Heartbeat, Express Yourself, Born This Way, She's Not Me, Give Me All Your Luvin', Turn Up the Radio, Open Your Heart, Sagara Jo, Masterpiece, Justify My Love, Vogue, Candy Shop, Erotica, Human Nature, Like A Virgin, Nobody Knows Me, I'm Addicted, I'm A Sinner, Like A Prayer, and Celebration. 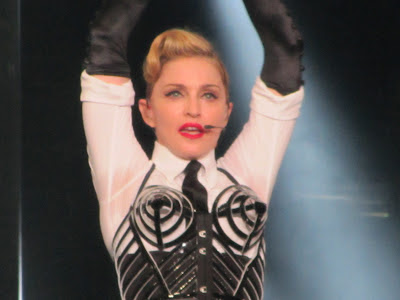 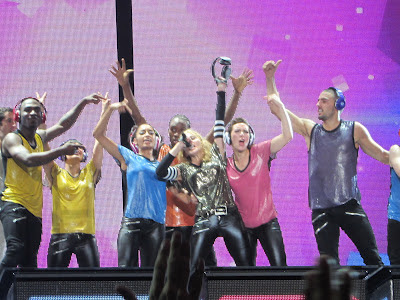 Email ThisBlogThis!Share to TwitterShare to FacebookShare to Pinterest
Labels: Madonna

These pics are amazing! Looks like a once in a lifetime kind of show.