Witches, Thanes and Madness, oh my! 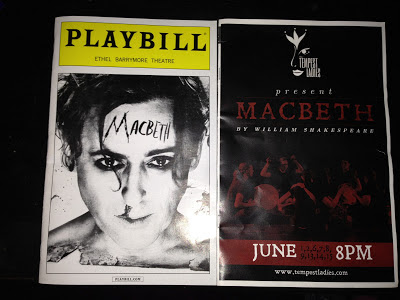 Last week I managed to see two remarkable and unusual productions of Macbeth.  They could not have been more different from one another.   One was Alan Cumming's one man on Broadway and one was the Tempest Ladies' all female production off Broadway.   Both were equally visually stunning, innovative and satisfying.   I'd see both again in a heartbeat.

I always thought that The Tempest was my favorite Shakespeare, but having seen Macbeth quite a bit over the last few years, I'm starting to think that it might actually be my favorite.  It's got the political element, the madness, the intrigue, the supernatural and the believability that I love.

Having seen it fairly regularly may have helped me follow along with Cumming's dive into madness with the Scottish play.   It's set in a cell in an insane asylum.  It appears that it's a forced commitment and the dread and fear is evident.  It's not strictly one man, as there are two actors playing doctor (Jenny Sterlin)  and orderly (Brendan Titley).  With just the slightest inflection of voice and change in body language, he conveyed the various characters.  His madness is evident and increases as the drama of the play unfolds, even as he subtly delivers the text, even as Lady M.  It's painful, astounding and consuming.  It's fairly graphic but also fascinating.  I was absolutely enthralled by the concept and the performance.

I was also enthralled by the beautiful production by The Tempest Ladies.   The Tempest Ladies is an all female company.  They play all of the roles in each performance, meaning each actress takes a turn at each character.  Each character is assigned a symbolic item of costume and the transition between actresses is so seamless, it's almost indiscernible that the actress has changed.   They highlight the text with percussion instruments and chanting.   Each actress fiercely and fearlessly gives her all to each character and the result is gorgeous.  The simplicity lends further depth to the text.  It's also interesting to see women taking on the masculine roles of murder and power - even as Lady Macbeth pleads to lose her femaleness - "unsex me" -  in her plotting to kill Duncan.  I adore this theatre company and what they do is nothing short of extraordinary.

The Tempest Ladies' Macbeth is running through June 15th at The Actor's Theater Workshop on West 28th Street.  Tickets are available online  via Brown Paper Tickets.   It's possibly the best $20 you'll ever spend on Shakespeare.

Meanwhile, Alan Cumming's Macbeth is at the Barrymore through July 14th.  Tickets are available via Telecharge.  If you looking for something different and you  know the play pretty well already, this is a great take to see.