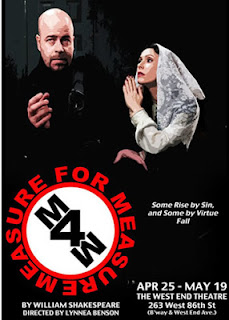 The Frog & Peach Theatre Company  has launched its spring Shakespeare at the West End Theatre on the Upper West Side.  This season, it's a great production of Measure for Measure.

This was my first time seeing Measure for Measure.  I thought it was going to be a comedy, but it came across more as a commentary on political hypocrisy.   Shakespeare wrote it in 1603 and of course, it could have been written yesterday, i.e. not much has changed with our politicians.  That's not to say I didn't laugh; I certainly did - it's full of irony and the cast delivered the wit with great skill.

Typically Shakespearean, it's full of hidden identity, trickery, lust, love and justice for all.   It is even a bit risque with accusations of fornication, unlawful marriage, pregnancy out of wedlock and sexual blackmail.

Directed by Lynnea Benson, this one had all of the elements that are customary of the Frog & Peach - simplicity in set that allows the text to shine and naturalistic actors practicing beautiful delivery. This production also featured fantastically flamboyant and sexy costumes by Asa Benally.
I've seen at least four productions of Shakespeare by Frog & Peach and I've enjoyed them all.   I love that it's Shakespeare in a neighborhood - I walk 6 blocks to spend the afternoon with them.   The company is so accessible and some of the actors deliver the text so naturally, it feels like they are just having a conversation with you - notably Brad Holbrook, Erick Gonzalez and Vivien Landau.

Frog & Peach always comes with the bonus of music - often, they set the tone with pre-curtain and intermission rock music.  This production features some sort of Dixie land jazz.  This production also features a lovely original piece by Ian McDonald and performed by company member Iliaria Amadasi.

I haven't seen Measure for Measure yet.