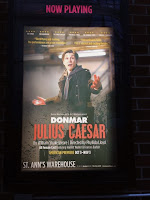 There's some extraordinary Shakespeare going on with the production of Julius Caesar at St. Ann's Warehouse until November 3rd.   We trekked over yesterday to take it in (oh, Brooklyn).   Survived the experience, just.   Disclaimer, Roxie and I saw this production at the Donmar Warehouse in London last December.  It was almost the entire purpose of our trip:  to see Dame Harriet Walter live, in person, on stage again.    Bonus: it is directed by Phyllida Lloyd who directed our beloved Mary Stuart, another life-changing Donmar production which thankfully made its way to Broadway.  We were thrilled, even if terrified, to see it again.

This is not your everyday Julius Caesar.  It's set in a women's prison (think "Orange is the New Black" but even more bad ass and BRITISH) and is played by an all-female cast of British actors.  Sexuality does not play into the production, nor does sexual orientation: only power.   Sometimes, the conversational presentation that these actors bring to the text make it seem like you're not even seeing a play it's that second-nature.   The conceit seems to be a play within a play, but there are times when I wasn't even sure that this was true, and I've seen it twice.  Mind is blown in every scene, it's that riveting.

The production was even better in this space as compared to the Donmar, although I think the Donmar space felt more terrifying because everything was so close in that tiny space. Still gripping, challenging, emotional, and terrifying.   It's all hard rock, blood, guts, fear, confusion, terror and courage: all in the name of country and politics and freedom.  I never really knew Julius Caesar was this much of a nail biter until I saw this production.  It thankfully wipes away any other production I have seen (i.e., that Denzel Washington on Broadway fiasco) and sets the bar very high for any I see in the future.

I liked Frances Barber as Caesar even more this time.  Her voice is amazing - thrilling and frightening. Dame Harriet Walter as Brutus, Jenny Jules as Cassius,  and Cush Jumbo as Marc Antony knocked out of the park again.  Dame Harriet's portrait of Brutus' agony in choosing between the love of his friend and the love of his country was palpable,  Supporting cast is phenomenal indeed.  The cast is very diverse in age and race - really lends to the fascination. 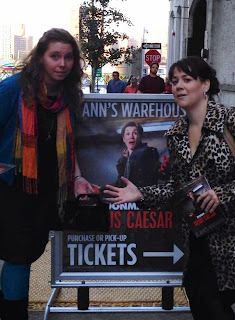 If you go, and you should, take the C or A to High Street.  There's a F train stop very close as well. Hopstop lied about Jay Street being the best stop - it was a not close enough for comfort and we arrived with  just under 10 minutes to spare. That was fine really as they didn't let us in until almost the appointed curtain time, but I'm pretty sure it started late as the loo line was ridiculously long. The way the entrance to the theatre set up lends to the experience - almost immersive theatre without being invasive.

Post show stagedoor notes: Frances Barber was lovely and we loved talking to her about the differences in the staging and theatre between London and New York. (Success - I managed not to fangirl over her episode of Morse).   We also got Cush Jumbo's autograph.  I was a little star struck by this ridiculously amazing actress.  Then there was Dame Harriet Walter.  I was actually coherent this time with her and managed to forego the use of any cursing words in her presence.  I did tell her to come back to New York all the time and she asked me to arrange it.   I'll be absolutely happy to do so, Dame Harriet Walter.

That time in London: 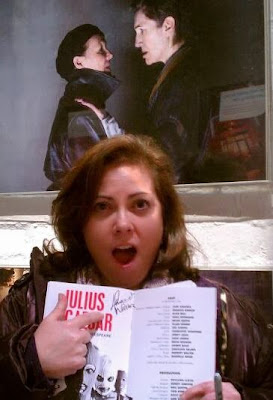 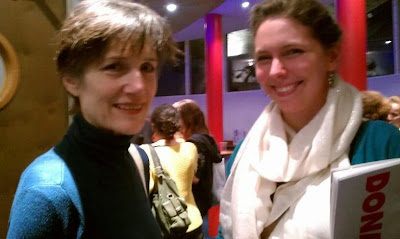 so jealous I adore Harriet!:o)