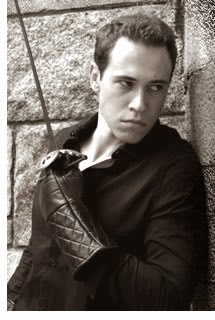 Last night I walked 10 minutes from my apartment to Denmark and I never left the Upper West Side.   The Frog and Peach Theatre Company has mounted another terrific Shakespeare production:  this time it's Hamlet, The Prince of Denmark.

I always have a great time at the Frog and Peach and this was no exception.   Director Lynnea Benson pointed out to me that it has been a while since they've done a Shakespeare tragedy and I found it immensely satisfying. (I prefer the tragedies.)  When in fact Hamlet is a categorized as a tragedy, there is much to find amusing within it and Lynnea didn't miss a chance to coax the humor as well as the angst from the company.

As I've come to expect from Frog and Peach, this Hamlet is a sexy, rock and roll production.  With rock music and modern dress setting the tone, it's sleek and the momentum is fast and exciting.    Brando Boniver plays the crown prince and with his good looks it's not hard to believe.  He played the prince with great momentum.   Making it even sexier and bending the typical gender guidelines, the back-stabbing double agents Rosencrantz and Guidenstern are played by the very hot actresses Amy Frances Quint and Ilaria Amadasi.

Regular company members of the Frog and Peach Theatre Company were present and never disappoint.  However, it was Alfred Gingold as Polonius who absolutely stole the show.   Beautifully natural as a father and counselor, he was at once gripping and hilarious in his delivery.   I could have listened to him for hours.

Full casting is Brando Boniver as Hamlet, Jonathan Reed Wexler as Horatio, Vivien Landau as Gertrude, Brad Holbrook as Claudius, Eric Doss as The Ghost/Gravedigger, Alfred Gingold as Polonius, Megan McGarvey as Ophelia, Stephen Siano as Laertes, Ryan Dreyer as Osric, Philip Oros as Fortinbras, Roger Rathburn as The Player, Hamish Carmichael as The Captain, and Amy Frances Quint as Rosencrantz and Ilaria Amadasi as Guildenstern.

A few weeks ago a friend from Texas, who happens to love literature and live performance almost as much as I do, told me that she just doesn't get Shakespeare.  Actually, she was there when I saw my very first Shakespeare at the Globe Theatre in Odessa, Texas, when we were in 8th grade.  I suggested maybe it's just because she hasn't had the opportunity to hear it and see it where she lives.   I know I'm privileged to see so much of it in New York City - and especially right in my own neighborhood on the Upper West Side of Manhattan.  It simply transports me and I couldn't care less if it's off-off Broadway or the Royal Shakespeare Company.   I just love hearing that text.  I particularly loved hearing Hamlet again, wherein so much of its text is part of our every day language (albeit usually misquoted).

Frog and Peach never disappoints and this particular production had me on the edge of my seat from lights up to  the bows.   You should check them out at the West End Theatre, (on the second floor at St. Paul/St. Andrew United Methodist Church) at 263 West 86th at West End Avenue.   It's a great space and the price can't be beat, especially for such classy acting:  always 18 bucks!   Senior citizens are only $12!

Buy tickets online via Smarttix or take a chance and just show up.  I know they'll find a spot for you.     They have a matinee today at 3 pm and will run Thursdays, Fridays, Saturdays and Sunday through November 10th.

I was most impressed by the Hamlet! This young actor obviously worked very hard in his preparation for the role. I understood every word he said, both literally and emotionally. His flow was flawless. His physical reaction and interpretation were beautiful and spot on !!! He used his whole body with agility and grace. His movement vocabulary has a very broad range and he used it to transition through some very contrasting passages. He WORKED every word with his whole being. I was not expecting such an easy voyage through the very textured Shakespearean verse. I was truly transcended !!! Congratulations to Ms Benson for her clear vision and excellent casting choice of a young and agile Hamlet!