And now for something just a little different: Renée Fleming is in a play...A PLAY. 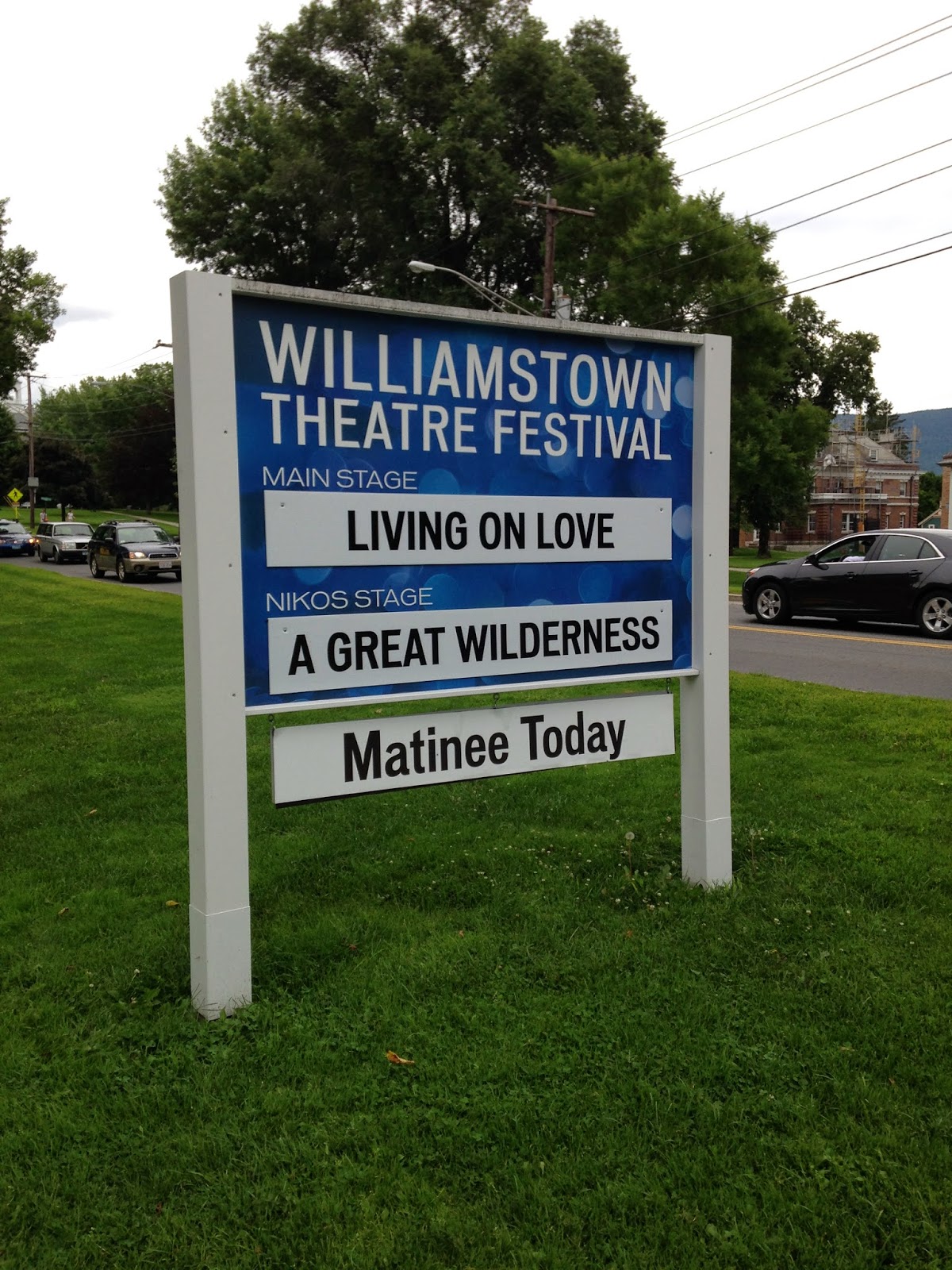 For two weeks this summer, opera diva Renée Fleming is in a PLAY.   When Renée told me that she would be doing a play this summer, my reaction was to screech, "A PLAY!?!" No need to panic though, it's a play with music about a famous opera diva.   On Saturday, Karigee and I drove up to Williamstown, Massachusetts to see this very play at the Williamstown Theatre Festival.

In LIVING ON LOVE, Renée plays Raquel, an aging, egotistical, yet insecure but famous opera singer who is married to an aging, egotistical, yet insecure Italian maestro Vito, played by Douglas Sills.  The maestro is sort of working on his memoir with a ghost writer played by Justin Long.  The writing isn't going well and a brave, ambitious and comely assistant, played by Anna Chlumsky, is sent by the publisher in to threaten the maestro into finishing his work or else return the sizeable advance.  Further antagonizing the action are two well healed and talented butlers played  by played by Blake Hammong and Scott Robertson.

Joe DiPietro's LIVING ON LOVE is adapted from Garson Kanin's 1985 play Peccadillo.  Admittedly I have not read Peccadillo and it has only been produced regionally, however Garson Kanin was one of the best when it came to madcap rom com writing: My Favorite Wife, Pat and Mike, Born Yesterday, Adam's Rib, among dozens of others both for film and stage.   Incidentally, Garson's uniquely brilliant wife Ruth Gordon passed away in 1985.  He married Marian Seldes in 1990.   He passed away in 1999 at the ripe old age of 87.

Lest you think it's type casting, the only real similarity between Renée and her character Raquel is that they are both famous sopranos.  Raquel is every stereotype in the book when it comes to her ego and operatic personality.  Renée plays up all of that and then some.  I was so nervous for her "acting" but I shouldn't have feared.  She's absolutely charming and is very funny.  She didn't miss a beat.

It's more accurate to confess that I did see a few other similarities between Renée and Raquel - they are both beautiful, stylish and have beautiful voices that make people melt (she does this to Justin Long more than once.)  "Knowing" her as I have for these past years, I do know that she's very quick and humorous - brilliant people usually are.

Fortunately, Renée does sing in many of the scenes - mostly it's snippets of arias and her recording of Vissi d' Arte is played on a record player (a scratchy quality is added to make it sound "period").   Renée also sings some of her lines - it's silly, sing songy - fun, but of course, it's the beautiful voice so always satisfying.  In one of her singing entrances, she stops to ponder if it's the birds singing, "Why no, it's just me!"  Adorable.

There are so many funny moments so well executed that it's impossible to relay them all - everybody was hilarious and my sides are still splitting from laughing so much.   I nearly fell off my chair when "Raquel" was conveying her dismay that she might be losing her power as a soprano and headed toward being a mezzo.   Douglas Sills was the Captain of Laughs with his ridiculous Italian accent, antics, tantrums, jealousy of Leonard Bernstein....he pomaded his hair with maple syrup in a quick attempt to impress his visit from Anna Chlumsky in one of the funniest gags ever on a stage.  I loved Anna Chlumsky (My Girl! Veep!)  and Justin Long (Ed, New Girl, King of the Hill).

I think my favorite scene was Raquel's reenactment of her famous Mimi in the La Scala Boheme for Justin Long.   Renée never performed in La Boheme so to me it seemed even funnier when she went way, way off from the story by having Justin Long strip off his shirt and rub olive oil all over his chest.  He's a well built young man so it was easy to admire, but also hysterically nerdy as he kept on his tie.   When they are interrupted by the maestro, his reaction was "Why he shiny?"   In the awkward moment, Justin Long covered his nipples with his tie.   The cast did their very best not to break character, but it was a very long pause as the audience roared with laughter.

It is a romantic comedy so there's the inevitable-jealousy making and love-making.  It's all predictable, but very charming in its old fashioned sensibility and style.  On Saturday night, the pacing was crisp and it all went by too quickly.  Kathleen Marshall's direction is smart and takes advantage of all of the madcap skills of her cast.  The set and costumes are gorgeous.  The whole show is as sparkling as a glass of champagne.

The play ends with Renée and Doug waltzing and singing the Irving Berlin tune "I'll be Loving You Always."   It's perhaps one of the sweetest endings I've seen....and I keep thinking that I'd really like Renée to record it on some hoped-for future standards album.   As we were waiting to say hello to Renée after, Justin Long passed us whistling the tune.  That was just about the sweetest ending too. 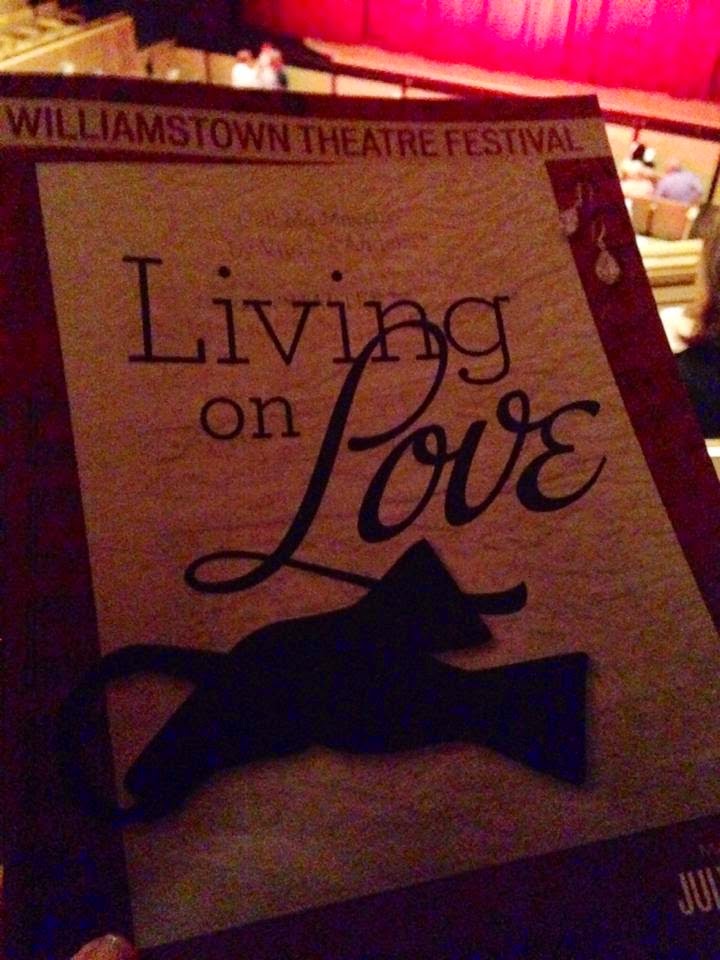 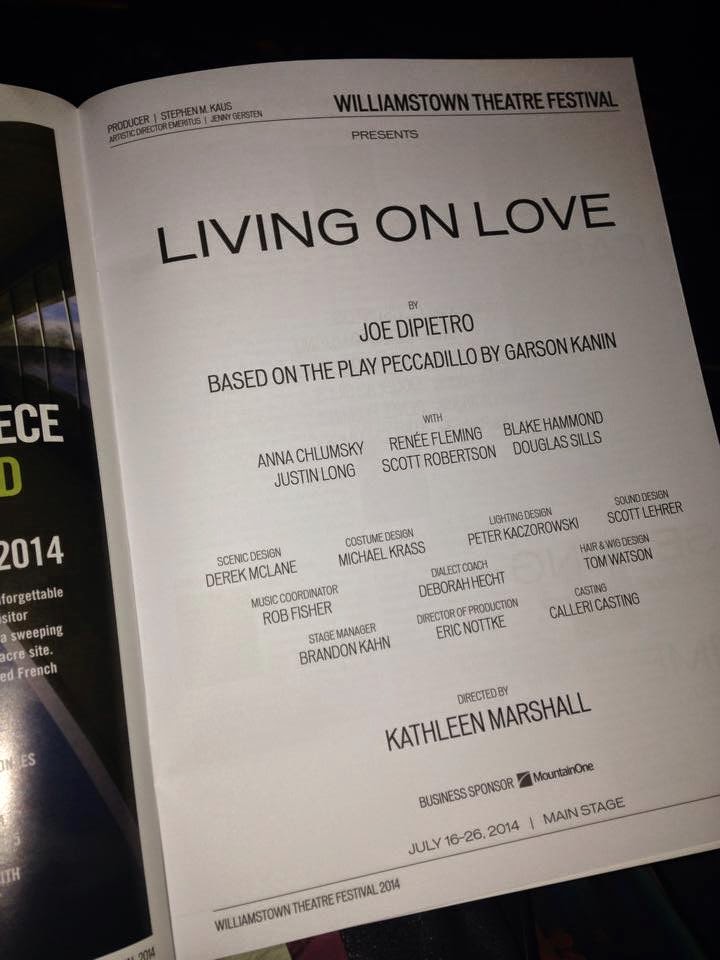 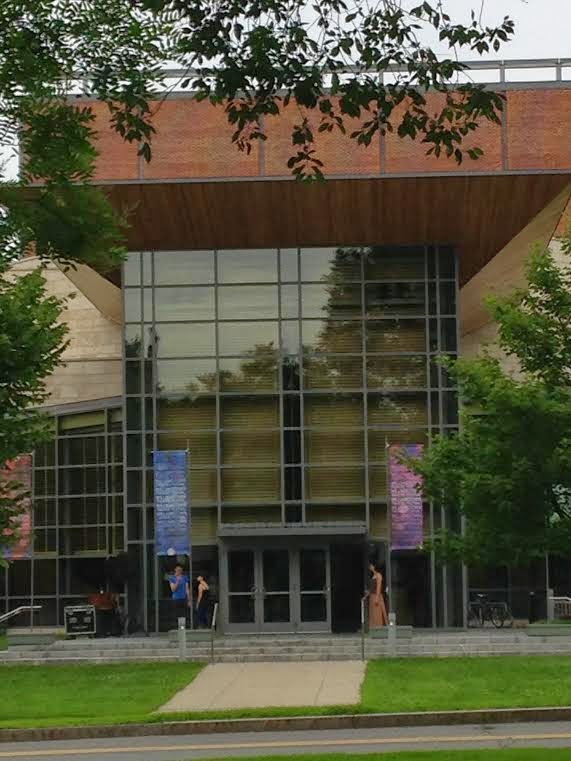 Fantastic report thank you! I wish there were a DVD being made, but I know that's pretty rare with plays.

Renée did in fact perform in propoductions of La Boheme early in her career both as Musetta (once) and Mimi (twice). But obviously it never became a staple as she found more challenging composers which suited her strengths and which very few others could sing well. Such a canny career. The jokes sound hilarious. Wish I could have been there. Sigh.

Thanks again for the report!

Thanks Anon - Didn't realize that Renee sang La Boheme during and shortly after her student days. I'm sort of glad she abandoned. Yeah, a DVD wouldn't really happen - 2 week run in a tiny venue at a theatre festival.