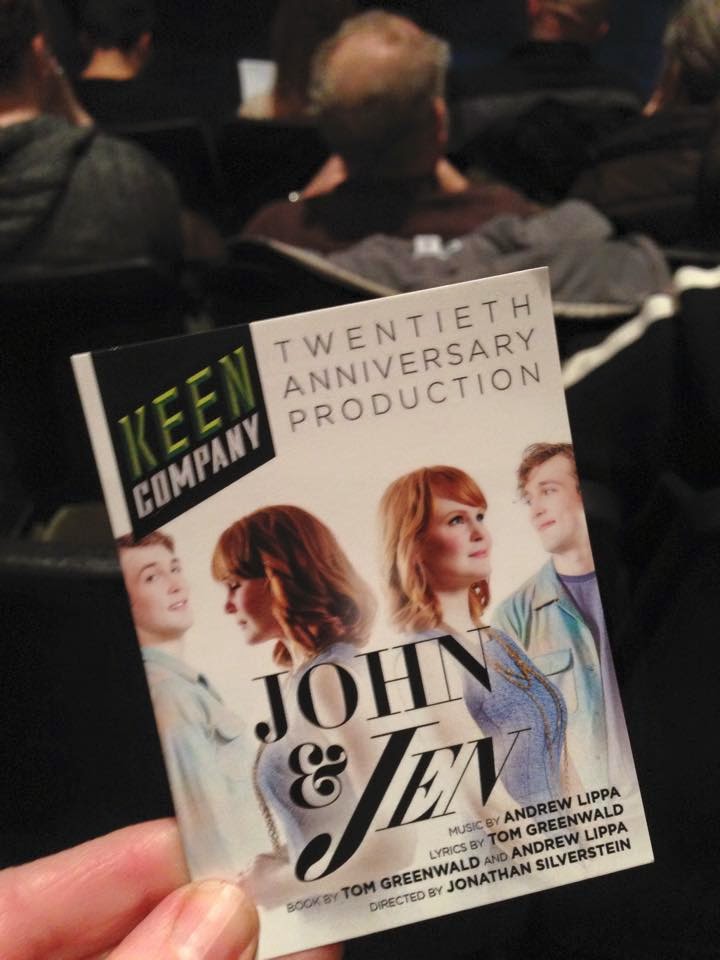 I was so delighted to see Keen Company's new production of John & Jen on Friday night.  The two-hander musical stars Kate Baldwin and newcomer Conor Ryan.

It is a sweet, charming, funny, poignant musical with a great score and clever lyrics by Andrew Lippa and Tom Greenwald.  Orchestrations are by another Broadway composer, Jason Robert Brown.
I loved the inventive music - from fun and very catchy to heart-string pulling.
The production is slight, leaving the actors to convey all of the changing times with their craft and they manage it very well.  Both actors have to play children to young adults, little brother and big sister in the first act and son and mother in the second act.   It's a beautiful coming of age story set during the 1960s into the 1980s.

Conor is adorable at all times.  He does funny very well and his smile is contagious.  He had me laughing so much with his antics, which seems effortless.  He's got a great voice too.  I can't wait to see more of him.

As for Kate, she never disappoints me.  Seeing her in the tiny space at The Clurman in Theatre Row is a magical experience.  The opportunity to see her on this stage is not to be missed - she's transcendent.   Her character  - big sister then mother - ages from 13 to late 30s.  Her transition is seamless and breathtaking.  She played all of the emotions so well and had me on the edge of my seat.  I really think there's nothing she can't do.

John & Jen plays until April 4th and I really think I will have to revisit this one.   Tickets are available at the Theatre Row box office at 410 West 42nd Street (btw 9th and 10th) or via Telecharge.  I used a Broadwaybox discount for $50 tickets.

This is Keen Company's 20th Anniversary Production and to that they deserve many happy returns.  I have seen so many of their productions over the years and am never disappointed.  They offer a satisfying variety of drama and comedy, plays and musicals (their production of Marry Me A Little with Lauren Molina and Jason Tam is one of my favorite things ever  and they also gave me a chance to see the incomparable Kathleen Chalfant in Painting Churches).