Rasheeda Speaking at the New Group 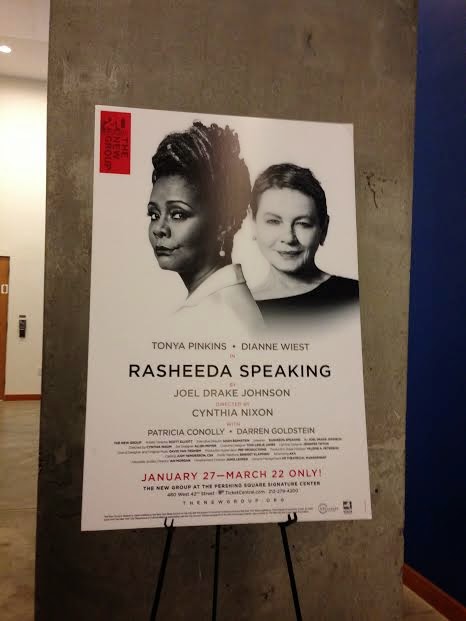 Wow!  What an afternoon.  Aside from it conjuring all sorts of office PTSD for me, I found the play to be uncomfortable and quite terrifying, although quite hilarious.  It's the best and worst kind of comedy - the one that punches you in the stomach and makes you think about its message for maybe forever...and hopefully it reached out and changed a few minds.  The story is set in a doctor's office. The main characters are two administrative assistants who seem to be friends and amiable co-workers until their boss stirs things up by promoting the older white one in order to get rid of the less experienced black one.  Nobody will say what they really mean and it's an itchy dance around racism and prejudices, both perceived and very real.

I felt so challenged as a white person in the midst of some very diverse audience demographics.  I was sitting beside an older white woman and the two of us were sandwiched between black women.  The audience was fairly mixed racially, although I was among the few younger seat fillers.   All of the black women in our row were ready for Tonya Pinkins to take them to church, as it were.  They were having a great time!  Meanwhile, I felt nervous on a number of levels.  There are office politics, scary co-workers and manipulation flying around the room.  The whole kettle threatening to boil over at any minute and it has everybody on edge. Each of the characters (and probably every last audience member) had some prejudice whether they admitted it, much less realized it.

The play was superbly acted, which should not surprise anybody considering the pedigree of its actors and director (Tonys, Emmys, Oscar, etc galore).  As usual, I had a hard time keeping my eyes off Tonya Pinkins.  She's a magnet, cool and gorgeous and so very, very real in every movement.   Dianne Wiest is sheer perfection at playing meek and unsure of herself and falls apart in front of the audience's eyes.    Darren Goldstein is smarmy and disgusting and quite perfect as the manipulative, upper middle class white doctor (ugh, my bosses were not doctors, but lawyers and I could see his type coming a mile away).  Patricia Connolly is wonderfully oblivious as the little old lady patient - she has no idea that she's saying anything wrong at all and quite outrageously threatens to steal the whole show.

Rasheeda Speaking is on until March 22nd produced by The New Group at The Pershing Square Signature Center in the The Romulus Linney Courtyard Theatre, 480 West 42nd Street.  I used Broadwaybox for discounted tickets.