Audra McDonald, Your Tardiness Is Excused 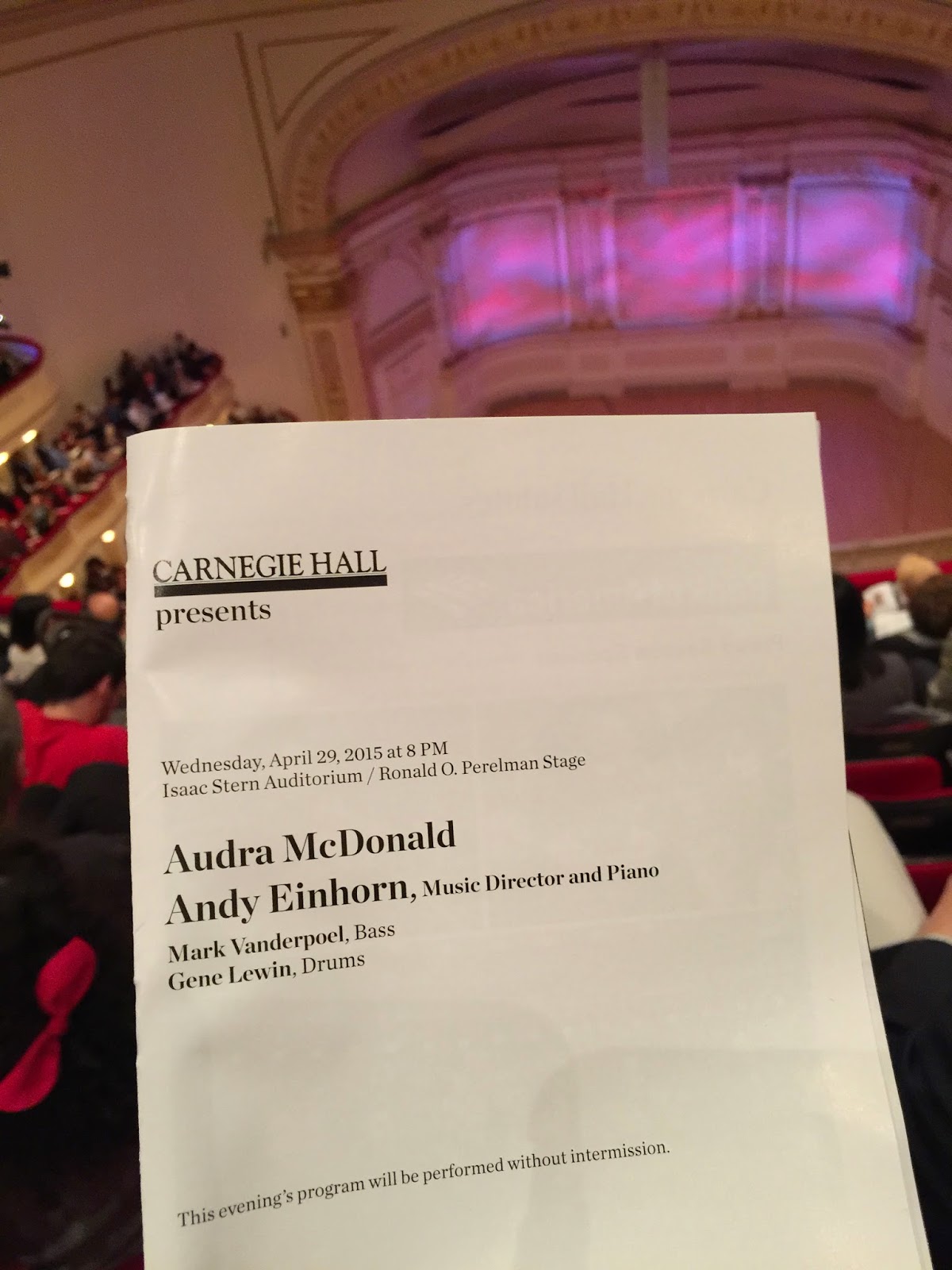 We were supposed to see Audra McDonald at Carnegie Hall on December 12, 2014.  Unfortunately, she postponed due to a work conflict.  We finally saw her on Wednesday night, April 29, 2015.  She was just a little late; but, for the show she gave us, she is certainly excused for her tardiness!

I have seen  Audra in concert (mostly at Carnegie Hall!) and on Broadway here in New York many times now and I am never, ever disappointed.  In fact, I'm usually thrilled.  Her performance this week was definitely thrilling.  She gave us almost songs from the musical theatre, both from the golden age of Broadway and modern musicals, and with just a couple of standards thrown in for a treat.

I love Audra - her stage presence is magestic yet humble.  She says what's on her mind and she shares hilarious anecdotes (i.e. I was the darkest Mother Abbess ever; Chipotle is my office; "Audra McDonald dropped the F Bomb in Carnegie Hall") .

She called this concert "Songs from My Living Room."  She chose songs that she great up listening to as well as shouting out to the ladies who inspired her:  Barbara Cook. Chita Rivera, Betty Buckley, Patti LuPone, Liza Minnelli.   She especially sang in honor of Chita Rivera and Barbara Cook and said she hoped she would have a Broadway career like they have had.  I think she'll do okay in that deparatment (6 Tonys and counting and she's only 44 years old).

Seeing her in concert is like just hanging out with her friends, until she opens her mouth and out pours that huge, glorious, warm mezzo sound, not mention when she occassionaly throws in some soprano notes and your eyes want to roll back in your head.

"Sing Happy" from Flora, the Red Menace by Kander & Ebb
"Mister Snow" from Carousel by Rodgers & Hammerstein (Audra's first Tony Award!)
"Chief Cook and Bottle Washer" from The Rink by Kander & Ebb
"My Buddy" by Walter Donaldson and Gus Kahn
"Let's Not Talk About Love" from Let's Face It by Cole Porter (additional silly lyrics personalized for Audra by Dachslager)
"No One Else" from Natasha, Pierre & the Great Comet of 1812 by Dave Malloy
"Proud Lady" from The Baker's Wife by Shephen Schwartz (he especially revised lyrics for Audra)
"It Was Never You" from Knickerbocker Holiday by Kurt Weill
"Vanilla Ice Cream" from She Loves Me by Bock and Harnick
"Tale of Otter and Bear" by Shaina Taub
"Maybe This Time" from Cabaret by Kander & Ebb
"How Could I Know" from The Secret Garden by Marsha Norman and Lucy Simon (Audra's Broadway debut!)
"Facebook Song" by Katie Miller-Heidke (who happens to be Australian opera singer!)
"When I'm Gonna Go Back Home" from The Scottsboro Boys by Kander & Ebb
"Writing on the Wall" from The Mystery of Edwin Drood by Rupert Holmes
"Make Someone Happy" from Do Re Mi by Styne, Comden and Green
"Rainbow High" from Evita! by Andrew Lloyd Webber
"Climb Ev'ry Mountain" from The Sound of Music by Rodgers and Hammerstein
"Over the Rainbow" by Harold Arlen and E.Y. Yarburg 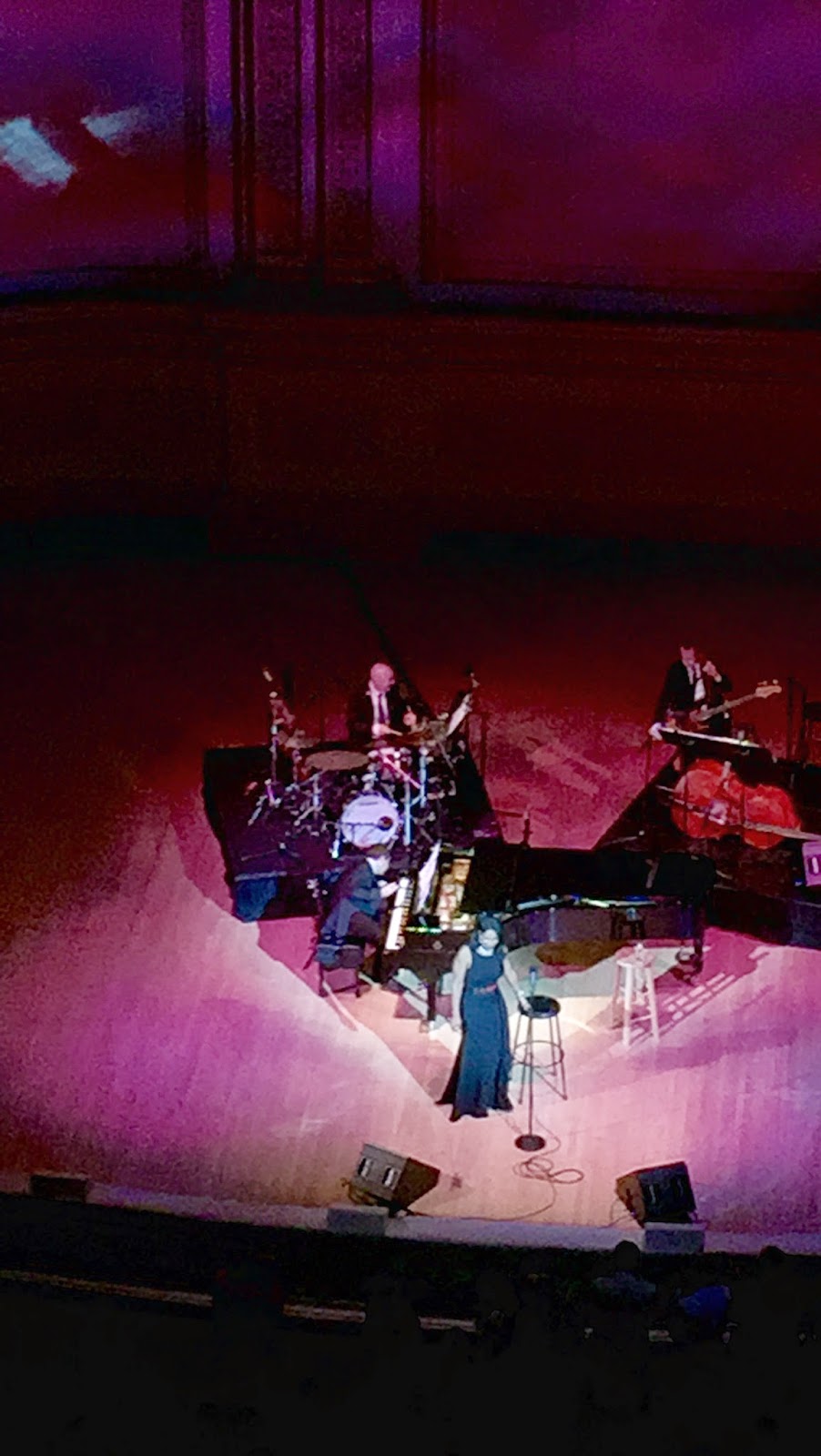