Last week I went to Empire Opera for the first time, specifically to see Nika Leoni.   I had been looking for a chance to hear her again, ever since I heard her in "Pushkin's Little Tragedies" in 2009.

That's a long time to remember such a voice, but her voice is that memorable.

Empire Opera, a New York company founded in 2007, hosted this Composers Concert, i.e. an evening of Songs by Singers, at the Advent Lutheran Church on Broadway.  It was an enjoyable evening, especially in that it was only blocks from my home.  I was impressed by the variety of talent and performance.

For this evening, Nika Leoni was accompanied on both of her pieces by pianist Violetta Zabbi.

Nika's performance on this particular evening was especially thrilling, singing her own compositions.  In the first act, she performed a selection from her song cycle Love Songs, with text from the poetry of Sara Teasdale.  This short set was lovely and I found myself wanting more.   Five of the six songs were performed coquettishly and all were quite pleasing.  These poems/songs are teasing and playful, however, my favorite of this piece was To-Night, a departure in that is a song of passion and want, which Nika sang powerfully.

Nika's second work of the Composers Concert was Euridice Suite, for which she co-wrote text and score.   Scene I lyrics are by Marilena Ruscica and Scene II lyrics are by Nika.   Here, they took the story of Orpheus but told it from Eurydice's perspective.   It's an interesting and welcoming take on a familiar story.  The music has a sound of mystery and runs the gamut of feelings which Eurydice must have been experiencing during her time in Hades and separation from her husband.   It's dramatically beautiful while conveying confusion, love and finally acceptance.  Again, Nika is so vocally expressive and took me on the journey with her and honestly I found myself quite lost between her voice and her telling of the story.

Nika Leoni's talent is extraordinary.  Her lower tones are so velvety rich that I almost believed her to be a mezzo, but she belies that with her gorgeously full upper register.   There's a lovely brightness in the voice as well as deepness.  She exudes a calm and elegant presence, while vocally she expresses emotion with great aplomb and maturity.   It's an exciting combination and voice I hope to hear again and again in the future. 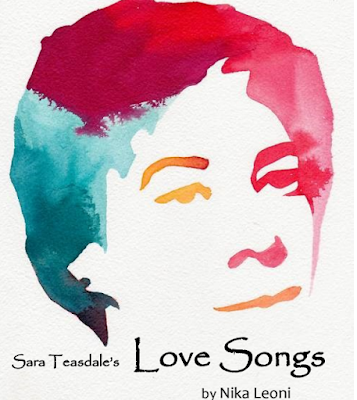 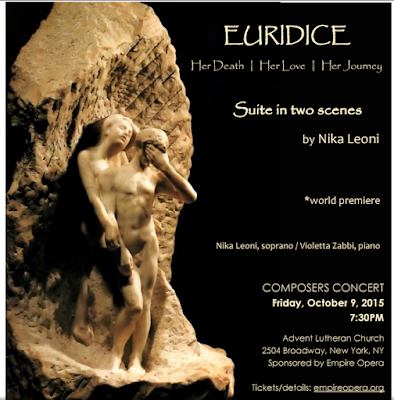