"A third production with Phyllida Lloyd is planned, and although the play has not yet been determined, there is one tragic hero Walter would relish taking on. 'Having played Lady Macbeth'—opposite Antony Sher, in 1999—'I would love to play Macbeth,' she said. 'We were yin and yang. I would like to try the yang to the yin—or whichever the female is. I can’t remember.'"

Having seen Dame Harriet twice in the all-female production of "Julius Caesar," once at the Donmar in London and once at St. Ann's Warehouse here in New York, I'm here to tell you that she knows what she's doing when it comes to Shakespeare and playing a traditionally male role.  She's equal parts thrilling and terrifying.

In a few weeks, I'll see her in “Henry IV” at St. Ann's with two other card carrying members of the Dame Harriet Walter Society.   It's imperative.

(and yes, I've seen that Macbeth in which Dame Harriet played Lady M to Anthony Sher's Macbeth - it was released to DVD in 2003) 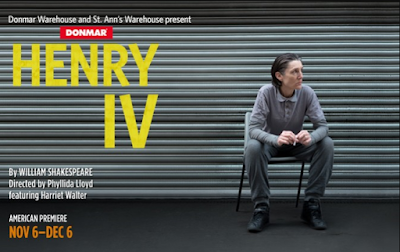