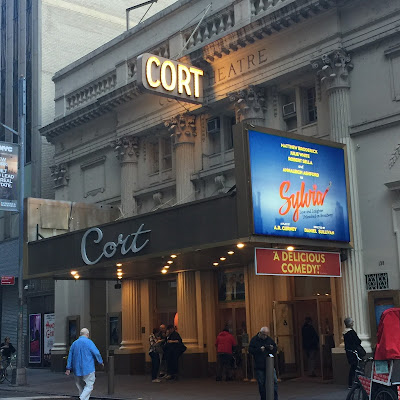 Almost exactly twenty years ago I saw A.R. Gurney's play Sylvia at the Zach Theatre in Austin, Texas. It was the first really grown-up comedy I saw and I've never forgotten it.

It's a play about a dog and the man who loves her...well, mostly. It's a really the sweet story about a married couple but it's the dog named Sylvia who really steals the show. Over the years, I would recall that dog named Sylvia, especially after I adopted my own little dog named Little Bit (actually shortly after I saw this play - maybe I was inspired). Mr. Gurney perfectly captures the voice and actions of a dog, with the help of the actress who plays her. I would imagine Little Bit talking to me as Sylvia talked to her human.

I was thrilled to see Sylvia in previews and was treated to "blogger night."  Two of the stars, Julie White who plays the wife and Annaleigh Ashford who plays Sylvia, were on hand to discuss and share stories of their process in preparing for this comedy.  Both ladies are dog owners: Julie has an ancient Pomeranian named Lulu (my Little Bit was a Pom too) and Annaleigh has a toy Australian shepherd named Gracie.   Annaleigh took obedience and agility classes with Gracie to help her prepare for this role.

The play made its New York debut off-Broadway starring Sarah Jessica Parker as Sylvia the dog at the Manhattan Theatre Club.   Now, her husband, Matthew Broderick, is starring as the husband who adopts Sylvia, on Broadway at the Cort Theatre.    Robert Sella marvelously plays various roles to round out the cast.

This time around, I'm a little more mature than the first time I saw it so the sweet, matures themes of the play touched my heart differently, but I still found Sylvia to be one of the most hilarious plays I've ever seen and my sides aching from laughing were proof of that.  I'm still chuckling at the thought of Annaleigh Ashford and her antics as the dog, especially in her scenes opposite Robert Sella.    (I want to see Annaleigh in EVERYTHING - she's delightful, brilliant, fabulous...)

Because the dog is played by an actress, you are privy to her thoughts and conversations and it's sometimes easy to forget that she is in fact playing a dog.  However, her movements in prancing about and constantly sniffing at things keeps you in the suspension of disbelief.  Her barks and greeting are "Hey! Hey!"  She doesn't hold back on her feelings for her new owners, the husband she loves, the wife of whom she's a bit wary of and just a tad jealous.  From her antics in the dog park to her behavior in the living room to her reactions to the stranger in her home, she has the audience in her paw...and practically rolling in the aisles with glee.  When she sees a cat in the park, her reaction is just about the funniest - and spot on dog characterization, save the wonderfully foul language - you'll ever see.   The performance is raucous and the audience laps it up.  A friend of mine went with her husband and she told me she never remembered him laughing so hard.  While it's sweet and simple adult-themed play, it's one of the best nights of laughing you'll have, particularly if you've ever had a pet.

Beginning this coming Tuesday, November 10th, audiences will be invited to stay for post-show discussions that will feature members of the Sylvia cast and company, in addition to leading animal experts, authors, media personalities and animal-related non-profits for its Tuesday Talkback Series.

Sylvia runs until the end of January.  Tickets are available via Telecharge or by calling (212) 239-6200 or in-person at The Cort Theatre box office (138 W. 48th St. between 6th and 7th avenues, around the corner from the B/D or the N/Q Trains ).  Discounts are available via BroadwayBox.   A limited number of Rush tickets are available for purchase in-person at The Cort Theatre box office beginning at 10am Monday - Saturday (12pm on Sundays) for that day's performance(s) only. Rush tickets cost $32 with a maximum of two tickets per person. Rush tickets are subject to availability and may not be offered at all performances. Rush seating locations will be determined at the discretion of the box office.