Much Ado About Nothing at The Frog and Peach Theatre Company 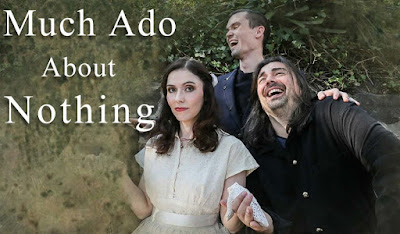 I've been going to Shakespeare productions at Frog and Peach Theatre Company for quite a while.  Besides getting to hear and see the words of Shakespeare well acted, it was fun to walk just a few blocks for them right in my neighborhood.

But now, they've moved down to midtown.  It's still worth going to see them!   Now ensconced at the Workshop Theatre (312 W 36th St. 4th Floor), they are better than ever.  The black box space is just a bit more intimate and the acoustics are marvelous.  And really, New Yorkers are happy to travel any where in the city for great theatre, right?

On now, Frog and Peach has mounted a really groovy production of Much Ado About Nothing.  As usual. director Lynnea Benson takes a rock & roll approach - it's fast and tight and ultimately fun to watch.  It's so much fun to see Lenny Ciotti as Benedick.  He's hilarious and it's cool to see an actor move to stage front from the usual cast of supporting characters.  While not your typical leading man, he's a refreshingly wonderful and is quite marvelous in the role.  I was rooting for him all along.  I really hope to see him in more roles at Frog & Peach (perhaps Macbeth? God, he'd be so good).  Lenny and Amy Frances Quint as Beatrice had great chemistry.  I couldn't wait for them to get together!   Amy is always the perfect leading lady - beautiful and regal, but she handles the comedy very well too.

Seeing this company's performances on a fairly regular basis over the years has lead me to recognize so many of the actors and witness their progress as Shakespearean experts.  I always love where they take me.   Marcus Watson as Claudio and Ilaria Amadasi as Hero are perfect as the young lovers.   Veteran actress Vivien Landau perfectly gender bends Leonato to Leanata as mother to Hero.  I think it should always be the mother - brava to Vivien and brava to Lynnea for making this change.  David Elyha absolutely steals the whole show as the ridiculously incapable constable Dogberry.  It's one thing to see him hilariously and nattily dressed as a hippy, but his delivery is riotous.  It's one of the funniest performances I've seen.

The Frog and Peach always features music in its productions - classic rock & roll before curtain and during intermission always set the tone.  They also wonderfully feature original music.  This production features original music by Ted Zurkowski and is wonderfully performed by actor David Personne.

I enjoyed all of the performances and it's always a treat to see company members, old and new, JP Makowski, Alyssa Diamond, Matthew Velez, James Foster, Jr., John Lampe, David Personne, Alec Barniskis, Liz Tancredi, Paul Battiato, Samuel Douglas Clark, Jamar Brathwaite and Vicki Kulkin.  They all round out this production fabulously.  A little bonus is that Samuel Douglas Clark, an Aussie, recites his lines with a decidedly British accent.  I have to admit that this Anglophile gets kick out of hearing Shakespeare with a posh accent amongst a very American cast (save for Italian actress Ilaria Amadasi who still speaks with a Italian accent, which is funny since this play is set in Sicily.)

I'm so glad I saw this production.  It's a play I've seen a number of times both on stage and on film, and Frog and Peach doesn't disappoint.  It runs for another week -  November 15 at The Workshop Theatre (312 W 36th St. 4th Floor - between 8th & 9th Avenue, just around the corner from the 34th street subway stop on 8th Avenue) with performances Thursday–Saturday at 7:30pm and Sundays at 3pm. Tickets are $18.  Tickets are available at the door or via SmartTix .

Email ThisBlogThis!Share to TwitterShare to FacebookShare to Pinterest
Labels: Frog and Peach Theatre Company, Much Ado About Nothing, off-Broadway, Shakespeare