Riedel the Needle and Playbill have both reported that Bernadette will take part in a reading of Stephen Sondheim's Bounce at the Public Theatre, with a possible run at the Public to take place next year. This would mark Bernadette's return to New York Theatre after her 2003-2004 Tony-nominted turn as Momma Rose in Gypsy, for which Sondheim wrote the Lyrics. Most of Bernadette's concert repertoir consists of Sondheim's songs and Bernadette brilliantly originated the role of Dot in Sunday in the Park with George and the witch in Into the Woods. 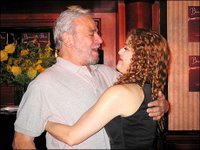 Sondheim himself has said that she is his favorite enterpreter of his work. Bounce is the only Sondheim musical that has not made it to the Broadway stage and he can't seem to give up on it. I know very little of it, although critics and friends of mine did not like it when it played out of town, so I must reserve judgment. I long for more Bernadette on the stage in just about anything, so it would be the icing if she were in a Sondheim piece. The Public Theatre is considered off-Broadway but successful shows have moved uptown to Broadway venues. One can dream.

Speaking of dreaming, chatteratti have recently been buzzing about more Sondheim revivals. Roundabout Theatre's Broadway revivals of Assassins and Pacific Overtures over the last two years and now the successful revival of Sweeney Todd, have Sonheimites dreaming of more to come. The innovative and brilliant Sweeney Todd director John Doyle, is directing a similarly conceptual revival of Company (wherein the actors play their own instruments) in Cleveland later this year and there is hope that if it is successful then it will make it to Broadway.

Dreaming on, the weekend chatter about the revival of A Little Night Music still hasn't died down and now Bernadette's name is being thrown out as Desiree to Angela's Madame Armfeldt. Oh it would be bliss.
at 7:57 AM