Sarah B - GET OFF THE FLOOR! 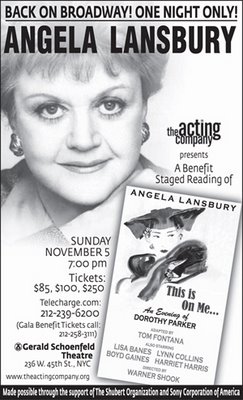 ANGELA RETURNS! WHO CARES THAT IT'S ONLY ONE NIGHT!? Of course, I'll be there! 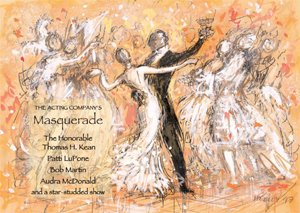 The Masquerade GALA, the annual major fundraiser of The Acting Company, will be held on Monday, October 23 at Cipriani Wall Street and honors Patti LuPone, a founding member and Board Director of The Acting Company and the Honorable Tom Kean. Drowsy Chaperone Star Bob Martin will emcee the event chaired by Emmy-winning Producer/Writer Tom Fontana (OZ, Homicide, St. Elsewhere). An All-Star Broadway show with Audra McDonald and Angela Lansbury will pay tribute to Patti Lupone's career and Governor Kean's Humanitarianism. (Of course, this is when I'm in Paris - I guess I won't have to drop $$$ on this one. Sigh.)