Shop 'til you drop

Treasures abound and it's for a good cause. 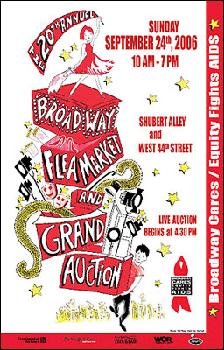 Last year I found these playbills: the original 1956 My Fair Lady with Julie Andrews and Rex Harrison on the cover for only 25 cents; a playbill from The King & I in 1978 in with Angela Lansbury on the cover - a real treasure since she was only in it for three weeks; a playbill from the 1974 Mack & Mabel that starred Robert Preston and Bernadette Peters; a window card of Dirty Rotten Scoundrels signed by the entire cast; and, a window card of the 1981 tour of the Sweeney Todd starring Angela Lansbury and George Hearn.
at 6:05 AM