One Heck of a Six Degrees

This is one heck of a six degrees discovery about Angela Lansbury! As my friend Bob would say, this is just Lansburryiffic!

I just watched Angela's "Biography" on A&E - yes, my first time to see it, shocking I know.

In 1942, June Havoc was in a play in Hollywood with Angela 's mother Moyna MacGill - it was a grand guignol horror play. Angela was 17 years old. Moyna "hired" her to hand out smelling salts to the audience members who felt faint from being scared. (Just two years later, Angela would be nominated for an Oscar in her film debut of Gaslight.) June Havoc was the real life "Baby June" from the show Gypsy. Gypsy is the fabled story about June and Louise Havoc's mother Rose. June ran away and became an actress and of course, Louise became the famous burlesque performer Gypsy Rose Lee. In 1973, Angela starred as Mama Rose in the West End of London production Gypsy. She was the first to try it after Merman and the first to do it in London. (Merman had been asked to do it in London around 1960 but refused to go because she was in love with Jack Klugman (yes, Oscar) - her "Herbie" in Gypsy). Angela was scared to death to do Gypsy because she thought everybody would be expecting Merman and wisely she knew that she was no Merman. Arthur Laurents, who wrote the book for Gypsy, was directing the London production and finally convinced Angela do it because she could actually act the part - which Merman couldn't do. Of course, this lead to triumph. Angela toured Gypsy in the US and brought it to Broadway in 1974 and she won her third Tony for the effort.


Small world, isn't it? Small and funny and fine? (Yes - lyrics from the song "Small World" from Gypsy) Uh, who wrote those lyrics? Of course it was Sondheim! What else did Sondheim write? Well, Sweeney Todd of course, which he envisioned as a grand guignol horror!!!! Oh it's all a lovely full circle.


Oh good grief, I love stuff like this. My whole day is made. It really doesn't take much. 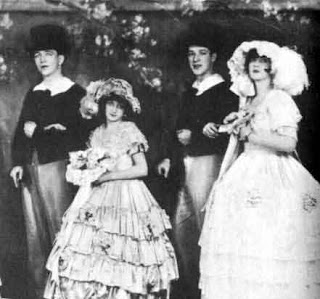 Yes. Small and funny and fine. Truly. I must catch the A&E Bio as well!

I did not know this! Wonderful.

wow, thanks for the info! i had no idea. i remember seeing gypsy when i was really young and then over and over again because they always show it on those classic movies channels. to this day i still know all the words to "you gotta have a gimmick". "small world" indeed!