Opera: When I Hear These Songs 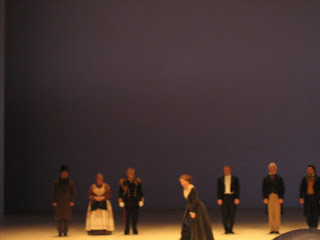 Tatyana sings "How I love to dream when I hear these songs, and float away somewhere, somewhere far off!" Oh, I feel this way too when it comes to Eugene Onegin! The music is absolutely haunting. I have been waiting to see this opera for two years. In the meantime, we amused ourselves with the abbreviated concert version of Onegin that Renée Fleming and Dmitri Hvorostovsky sang with the New York Philharmonic at Live from Lincoln Center. It's romance incarnate - first love, rejection, temptation, rejection again. The onstage beauty of Renée and Dmitri- both visually and audibly - has been unmatched to my eyes and ears. Saturday night's performance was a like a dream. How could I not give in to temptation to see it again?

For some reason, Sally (dumb) and I (dumber) didn't plan ahead with a second set of tickets for Eugene Onegin. Procrastination at its worst. Thus, we braved the cancellation line and behold: Orchestra, Row N, Seats 111 and 112. The color and light of the minimal set accentuated the beauty of the story. The costumes were typically Met and perfectly romantic. Gergiev was back tonight. The Met Orchestra plays as delicately as lace under his baton. Gasps were audible in the house at the lightness of the sound and the beauty of the voices. Bravis were loud and long through out the evening.

Bonus sighting: Khaleem saw Susan Graham again so he hunted me down to talk to her. Usually I'll talk to anybody but I was struck with a uncharacteristic moment of shyness...which fortunately passed as soon as I said hello to her. She confirmed that she's singing Sesto in La clemenza di Tito and Iphigénie en Tauride at the Met next season. She will also be singing her recital program in Europe. There is a chance that it will be filmed for DVD at the Chatelet du Paris, if she braves the the 11:00 a.m. Sunday morning series....she sounded doubtful about singing at 11:00 a.m. on a Sunday morning. She said that she'll be in Paris soon singing at a chamber music recital and then on to the L.A. Opera to sing The Merry Widow, which she's really looking forward to...but first a stop in Chicago to see her friend Pat Racette sing in Dialogues of the Carmelites. She's working on her annual opera quota by seeing all of her friends sing at the Met this week as well as Pat in Chicago.

Sally also talked to Renee's Mom in the Ladies' Lounge who was trying to inquire of a Russian woman if Renee's Russian was good. When the Russian lady didn't respond, Sally said "Let's hope it's better than this lady's English."
at 12:09 AM

Those Russian women - they NEVER give up any good info in the Ladies Lounge!

Kudos for chatting up Suzie.