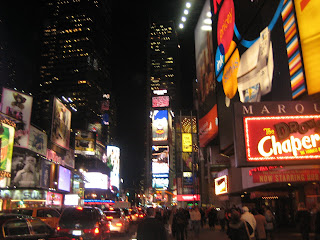 To celebrate the return of Broadway, the League of American Theatres and Producers presents a free, star-studded concert at the Marriott Marquis Theatre Nov. 30 at noon today: Angela Lansbury, Bernadette Peters, Seth Rudetsky and more! It's 5:56 am and I'm about to head down to hold my spot. Did you think I would miss this one? Well, then, you don't know me!

Well, that was the definition of short and very, very, very sweet! I had a front row center seat. Bob Martin opened it up as the Man in the Chair, kvetching as usual while throwing in some zingers about the strike. He had a couple of stage hands help him open his refrigerator and out walked Bernadette! She commented that she has been on ice for the last three weeks. She sang There's No Business Like Show Business. She was joined by cast members in costumes from almost every Broadway show. Bob Saggett knocked at the door and came in dressed just like the regular Man in the Chair. He wanted to borrow the Gypsy album which lead to a discussion that you can't just ask to borrow the Gypsy album, you have to specificy which one...lead in for Angela and then finally on came Angela. The audience, already turned on from the get go, went even crazier. She gave us We Need A Little Christmas, and was then also joined by all the other actors. It was a rip roaring, albeit very short time. Yes, it was worth the hours of waiting. 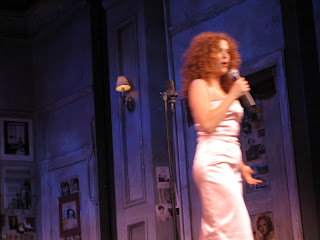 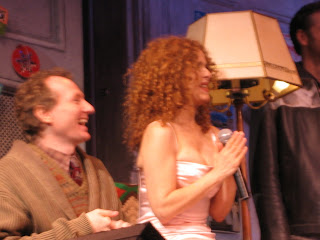 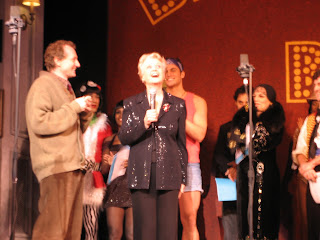 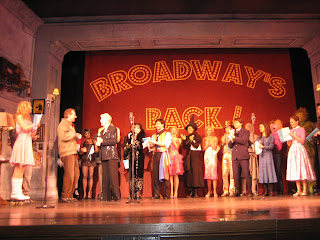 SarahB here - reporting from the marquis. There are 8 poeple in front of me - the earliest arrived at 5 am. 6 of these are college kids, the other 2 are slightly older than me. The lady right behind me just happens to be visiting from Michigan. At 7:30 there are just 12 people waiting and we are inside right in front of the theatre doors. See you here?!

OMG Enjoy, darling! Did you make fast friends with your line partners? You know if I could, I would have been waiting there with you!

This is awesome! I wish I lived in New York. You are so fortunate.

Ah, the ushers have arrived. It won't be long now. Thank you Marriott for the restrooms and the starbucks. The couple in front of me are from Staten Island. They left VERY early this am to get here. They were at The Homecoming reading last week and on Tuesday night won the YF lottery. They've had quite a week. I've seen a few familiar faces wandering around. Its a good day. I wish you were all here with me!

T minus 15. Charlotte St Martin has arrived as well as the press corps. Everybody is on their feet and the hum has escalated to a fair roar. I can hardly stand the anticipation. Angie and Bernadette in the same concert! Its a good thing Patti isn't on the schedule or you'd be receiving this message from the beyond. So signing off for now and you'll get a full report post-extravanza!

Wonderful write-up, as usual, Sarah! If I had known about this one sooner I would have taken the day off and been on the line this morning, too. Thanks for telling us all the details.

Sarah, Great read! You made me feel like I was there.

Alas, over the past week, I've been working the longest hours from early in the morning to late at night so my blogging has been spottier than normal. So it was nice to read up on what I missed.

What a great time! It looks like all of the professionals on stage gave Angela Lansbury a round of applause!