Les Liaisons Dangereuses is not that dangerous 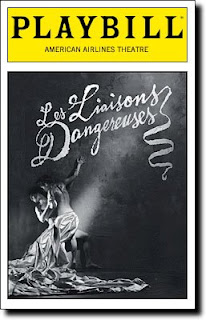 Les Liaisons Dangereuses opens tomorrow night at the American Airlines Theatre. Little Love and I caught it last Friday night in previews. The good news is that we only paid ten bucks. Roundabout has this great deal in which they offer $10 tickets to first previews. Our tickets were originally for April 11th, but that first preview was delayed, so Roundabout exchanged our tickets. So, only ten bucks to Laura Linney on stage. I love her in the movies and even subscribed to HBO so I could watch her beautiful turn as my favorite first lady Abigail Adams. She was everything I wanted her to be - so beautiful and so graceful - but she didn't quite bring the cold calculating meanness to La Marquise. Ben Daniels, making his Broadway debut, was fabulous. I loved his playfulness. He was the perfect cad. Mamie Gummer was perfectly delightful also, in her Broadway debut, as Cecile. The best thing about the production is the gorgeous period costumes by Katrina Lindsay. The set is disappointing, as it lacks the richness expected of pre-revolution France. The most dramatic effect is the use of huge drapery, which double as shields for sex scenes and scene changes. During the scene changes, there is a capella singing which I think is Baroque, complete with a countertenor. It was completely annoying. My favorite part of the evening was when I asked Little Love if he saw the movie, of course referring to the 1988 Dangerous Liaisons. He said, "Oh I loved Cruel Intentions." Groan. Of course, he was only a toddler when the first came out. Maybe he'll catch it on the classic movie channel. Anyway, I'm not sorry I saw Les Liaisons Dangereuses, but I'm even less sorry that I only paid $10.00.
at 7:54 PM

I LOVE the movie. That scene with Close running around insanely at the end is burned in my brain.

Unfortunately, Laura is very un-like Glenn Close in this stage production. Perhaps it's direction. Still, I was disappointed.