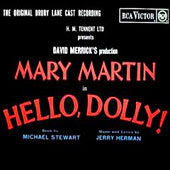 Brian Scott Lipton at TheatreMania reports that Masterworks Broadway will be releasing 9 recordings of musicals by Jerry Herman today at iTunes and Amazon, as well as three other digital venues. Best of all, the London cast recording of Mary Martin as Dolly Levi will be released for the first time ever as a digital recording. I cannot wait to listen to it! As much as I adored seeing Carol Channing in her fairwell tour of Hello, Dolly! in Austin, Texas back in the mid-90s, I don't listen to her singing. But Mary, you bet I listen to Mary! Masterworks Broadway "will introduce a podcast series on iTunes featuring interviews with Herman, Angela Lansbury, Harvey Fierstein, and other musical theater superstars telling intimate stories and discussing the creation and enduring appeal of Herman's musicals."
at 6:00 AM

And who you callin' Mary?

The best part is when she "ole's" during the final pullback on the title song.

Can't wait to hear what your review is of the Mary Martin "Hello Dolly," Sarah - if you say it's worth it, I'm getting it!