Hell to the yes, please!

Last night I heard from an insider at A Little Night Music that there was the possibility of a Big Broadway Star stepping in and saving the show from closing on June 20th.    This morning, we got the news from Playbill that Bernadette Peters! and Elaine Stritch*! are possibly taking on the roles of mother and daughter Armfeldt.  Hell to the yes, please!   I still don't care for the production itself, but there is still the music and those roles.  The music! Those roles!
Years ago, when I met Mr. Sondheim at that party and he told me that "Angie would be perfect as the Old Lady" in Night Music...Bernadette was standing next to him.  We both said to her, "And you'd be perfect as Desirée."


All along, I thought that the role of Desirée works better when played by an older woman - afterall, she's starting to think that her career is ending...and she has a child whom her former lover is surprised about.   Hello, listen to Send in the Clowns.  That's part of what makes it interesting.   Sorry, but younger people just aren't that interesting -  they haven't LIVED.
And if they wait to start sometime in July, Kate Baldwin might just be able to take on the role of Charlotte which she played the hell out of at Centerstage in Baltimore in 2008. 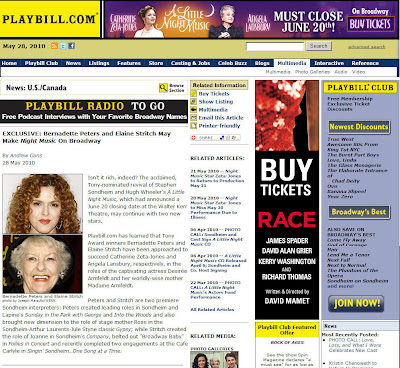 *If Angela would stay on it would be even more perfect, but then you run the risk of me being completely possessed and in dire need of an exorcist!
at 3:51 PM

I would love the idea of Angela and Bernadette together! I know it won't happen, but I agree that Bernadette would be a good choice. She's voluptuous, and would portray Desiree the way Desiree (if she had been a real person) probably would have been in that time period.