On October 16th, I finally heard Betty Buckley sing live again.   It was at Town Hall as part of the Broadway Cabaret Festival.   Kari and I hadn't heard her sing since February at Feinstein's, which is entirely too long.   I also brought my friend Karen 2 as well for her initiation of the Power of Buckles Live.

With Clifford Carter at the piano, Tony Moreno on bass (he's played backup with Betty for over 20 years!), Anthony Pinciotti on drums & Steve Cardenas on guitar, Betty mixed up - putting a little Broadway in to satisfy her Broadway fans and the rest to satisfy herself.  I found it all immensely satisfying.   Keeping with the cabaret portion of the evening, Betty told hiliarious stories from her career - trying to to fit into the cabaret genre and working and studying for a lifetime only to have someone else take the role.

When Betty belts, it's a thrill ride.  She extends her arm to lower the microphone away from her mouth and I hear her full, pure power.  But when she just sings, almost whispers, she takes me to a place where I feel like I am living inside the lyrics of those songs.  She lingers over notes, drawing out consonates, finding the heart of the piece.  Her interpretation is believable, evocative and completely provocative.

Betty highlighted songs from her new album, Bootleg: Boardmixes from the Road

.  This is the third live album that Betty has released - the first being the 1996 Evening at Carnegie Hall

are classic souvenirs of what it is to hear Betty sing live, but it's nothing like being surrounded by her voice at Town Hall or especially a small club like Feinstein's, Birdland or the Blue Note.

One of my favorite songs Betty has performed is "On the Fourth of July," which Kari and I first heard her sing at the Bluenote in 2007.  We had been waiting through many, many sets at Birdland and Feinstein's to hear that again.  Thank God it's on the Bootleg album, but even better she sang that evening at Townhall.   From her Broadway rep, she sang two from The King and I - "I Have Dreamed" and "We Kiss in a Shadow," which she partnered with her support for gay equality - we have the right to love who we love indeed (if you follow Betty on Twitter, you know she never veers from an open heart and mind).   Also from Broadway, she sang "I Got Lost in His Arms" from Annie Get Your Gun, which she admitted that she loves because she's really is a cowgirl in Texas - yes, a champion cutting horse competitor.   Additionally, she sang "It's a Fine, Fine Line" from Avenue Q, a love song that Betty sees the funny side of.

While I was hoping to hear "Pirate Jenny," which absolutely slays on the Carnegie Hall Live album, she at least did another favorite Weill number of mine:  "September."  And it was gorgeous.   Also bringing the audience to a complete hush was "A Ghost in this House" - I swear I heard the audience gasp.    Singing songs she loves, she included Mary Chapin Carpenter's "I am a Town" and "Come On, Come On," which are pure poetry.

Leaving jazz and Broadway behind momentarily, Betty became a full fledged Blues Singer when she nailed Billie Holiday’s "Stormy Blues."  She was so in to it, I thought that she was going to fall to the stage a la James Brown!   Wow!   I was taken back to the days when I hung out at Antone's in Austin, Texas.   She totally wailed on it.   Then she brought us back to the present with her take on the standards of a Girl Singer, which she often refers to herself as, "Blue Skies" and "Straighten Up and Fly Right."

She finished the evening with "Memory" - her signature piece from her Tony-winning turn as Grizabella in Cats.   When you hear something like this, you know you're not dealing with just any girl singer.

She told us afterward that we wouldn't see her at  Feinstein's in February as we normally do - we'll have to wait a year! - because she's doing the play "Arsenic and Old Lace" with Tovah Feldshuh in Dallas.   I thought Kari and I would expire right there on the autograph line.

February in New York will certainly be colder and darker than ever without Betty Buckley to brighten up the joint. 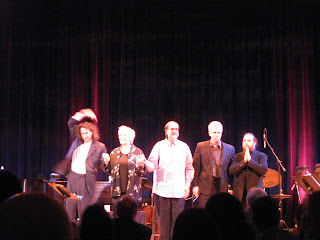 What a relief to finally read something which reflects our experience at Town Hall on October 16. We were among those geriatric fans (full disclosure, my wife and I are 58)in attendance and we were thrilled. We have followed Ms Buckley's illustrious career since seeing her in Pippin in 1974. What struck us about this spectacular evening (one of many) was that her fan base spans generations and that her willingness to apply her unique vocal instrument in a variety of musical genres has enriched our musical experiences. She demonstrates taste, technique, virtuosity and warmth. We were thrilled to see her at the top of her game and look forward to many more years of entainment from this extraordinary woman. Cowgirl, you rock!