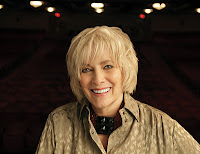 Last week, I ran into my next door neighbor.   We live in a brownstone with only ten apartments, so it's not unusual to see neighbors.  However, what makes seeing this particular next door neighbor is that I'm more likely to see him at the Feinstein's that I am in our own neighborhood.

You see, he's one of the excellent staff at Feinstein's at the Regency.   We took a moment to chat about the very exciting season that Feinstein's is just opening, beginning with Michael Feinstein, himself, along with Linda Eder, and later Bebe Neuwirth, Marilyn Maye and Barbara Cook.  He said, "And then we have your girl Betty Buckley coming in."   Oh, he is a good neighbor!

Indeed, I will be at Feinstein's to catch Betty's newest show, "AH MEN! The Boys of Broadway," in which she promises to sing songs from Broadway shows that she has always wanted to sing, including numbers from "Sweeney Todd," "West Side Story," "Guys and Dolls," "On A Clear Day You Can See Forever," "Pippin," and "La Cage Aux Folles."   Personally, I'm happy to hear Betty sing anything but the anticipation of hearing her sing a song from Sweeney is almost too much!

Betty's gig at Feinstein's runs from October 4th through October 29th.  Feinstein's is located in the Regency Hotel on Park Avenue at 61st Street.   It's just the right amount of uptown elegance and cache that lends one to feel like she's out for an evening in Old New York without all of the Upper Eastside stuffiness.   Tickets are available at 212-339-4095 or online via Ticketweb.
at 2:21 PM

That's a great photo of Betty. Can't wait for tonight! :)