New Cast for The Best Man

In case you couldn't already tell, I enjoyed the revival of The Best Man so much that I went three times.   In fact, the third time I attended was a charm:  thanks to my facebook friends, I was "endorsed" as the best candidate to win a set of tickets, a window card signed by the entire cast and a merchandise package.

It's an astonishingly relevant play about the backstage deals that go on behind a presidential nomination, written in 1960 by Gore Vidal.  The entire cast is superior and the production is classy.   I was excited to hear that the production would extend past it's initial limited run that was slated to end the first week of July.

Today, I received a press email that some of the cast, including Angela Lansbury, Candice Bergen, Kerry Butler and Erik McCormack will depart and be replaced for the remainder of the run thru September (not than anybody could ever replace Angie in my heart).

It's a really exciting replacement cast:   Elizabeth Ashley, Cybil Shepard, John Stamos and Kristin Davis.  Ms. Ashley previously took on the role of Sue Ellen Gamadge in 2000 in a brief run that earned the 2001 Drama Desk Award Outstanding Revival of a Play.  This is a Broadway debut for Ms. Davis and Ms. Shepherd.

Ms. Shepherd, Mr. Stamos and Ms. Davis will begin performances on Tuesday, July 10, 2012 at 7:00pm, while Ms. Ashley will begin on Tuesday, July 24, 2012 at 7:00pm. Original cast members James Earl Jones, John Larroquette, Jefferson Mays, as well as Mark Blum, who replaced the injured Michael McKean , will remain with the production through its final performance on Sunday, September 9, 2012. 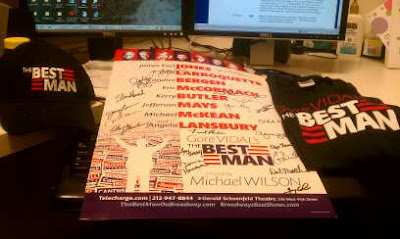