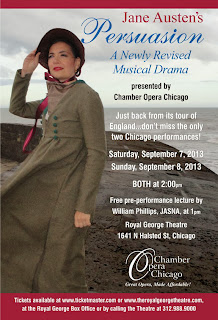 Chamber Opera Chicago passed through town last week to present the new, original work "Persuasion" based on the Jane Austen novel.  This is the  first opera written of Jane Austin and not only was it about time, it was rather well done.

Giving it even more distinction, the mezzo soprano Barbara Landis in the role of Jane Austen/Anne Elliot also wrote the libretto and served as one of the musical arrangers.  She is indeed an impressively busy lady as she is also the General and Artistic Director of Chamber Opera Chicago.
The score was not original, but was interestingly culled from 18th century composers, many of whom Jane Austen herself, as noted in the program, listed in her personal manuscripts.  The works included were by composers such as Haydn, Handel, Beethoven and others.
Not a full opera, but an operetta or a musical, the story was told with words and music.   At times during the evening, this lead to a community or off-Broadway theatre feel of unevenness amongst the performers, but overall it was absolutely lovely and entertaining.   The conceit of employing Jane Austen narrating the story as it went along, felt unnecessary and dragged the story a bit.  But maybe it was just me.  This is a Jane Austen story I love  - rent the 1995 "Persuasion" movie with Amanda Root and Ciaran Hinds and prepare to swoon your heart out.
Ms. Landis was a lovely Anne and it was easy to route for her.   Musical theatre actor Jeff Diebold played Captain Wentworth and was perfectly swoon-worthy as Anne's erstwhile suitor.   He was not only easy on the eyes, but seemed to be the most comfortable with words and music.  The opera singers were all fantastic.  I was particularly blown away by Christine Steyer, who doubled as Mrs. Croft and concert singer.  It was her turn as the concert singer that was very notable and brought very enthusiastic applause with her gorgeous clarion sound.
The scenes set in Lyme were particularly entertaining with the male cast playing British naval sailors, overindulging us with "Who Could Love Like an Irishman?" and then throwing in actual Irish step dancers to "The Dutch Skipper."  The Irish step dancers were played by adorable and actual World Irish Dance Champion brothers Peter Dziak and Randy Dziak  These didn't really do much for the story overall, but they sure did entertain.
The production was staged at the New York of Dicapo Opera Theatre on the upper east side.  It's a comfortable venue and the stage includes a pit for the musicians.  I've seen a number of productions there and I'm never disappointed.
More and more, I am enjoying the intimacy of chamber opera.  I was thrilled to experience Chamber Opera Chicago right here in my own back yard and hopefully I'll be able include something they do the next time I'm in Chicago.
at 6:27 PM

Love it. From a devoted Janeite.