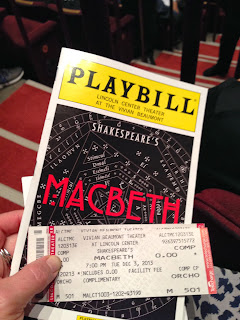 I attended Blogger Night at Lincoln Center Theatre's Macbeth on Tuesday.  We were wine and dined by 'wichcraft and swagged with wooden spoons engraved with the production logo and the quote "Double, Double, Toil and Trouble."  It was a great treat to see some friends and see a cool production of my favorite playwright.

This production of the Scottish play is the largest I've seen live.  It's directed by Jack O'Brien and boils it into a almost overflowing pot that fairly assaults the senses visually and audibly causing the skin to tremble and heart to pound.   The costumes by Catherine Zuber are a character in themselves, particularly as worn as haute couture by a lithe but fragile Lady Macbeth, played Anne-Marie Duff.   Ethan Hawke takes on Macbeth and keeps him on the edge of insanity.  He was completely weird and mad in the role.  I found him enthralling yet loathsome and almost couldn't wait for him to meet his end.

The other principals are Richard Easton as Duncan, Francesca Faridany as Hecate, Brian D'Arcy James as Banquo, Jonny Arsini as Malcom and Daniel Sunjata as Macduff.   The meddlesome witches were gamely and brilliantly gender-bended by John Glover, Malcolm Gets and Byron Jennings.  I especially wanted to re-wind Glover's recitations - he managed to make me laugh and shiver simultaneously.

To experience this production at a discount, visit Telecharge and enter the code MACBLOG for $75 Orchestra/$45 Loge tickets, a 67% savings.

To further immerse myself in all things Shakespeare, I have been watching PBS'  Shakespeare Uncovered.  This week's timely episode features Ethan Hawke as he researches Macbeth in preparation of taking on the role.   You can watch online or check your local listings.   It's a very necessary and satisfying series. 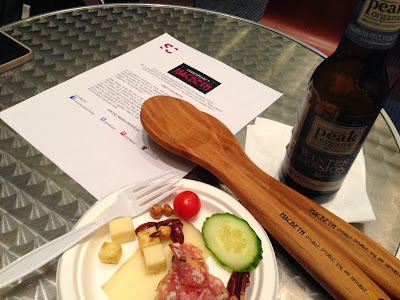 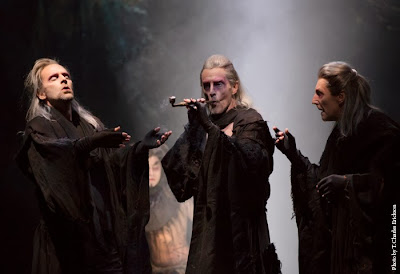 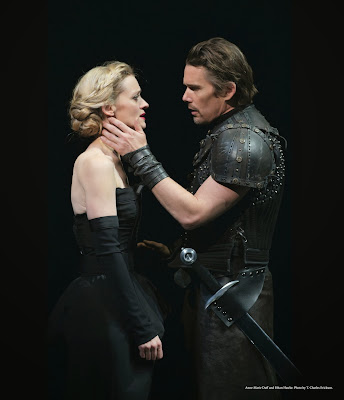 Thanks for the recommendation on PBS series "Shakespeare Uncovered." I am a teacher and journalist and this series will be an excellent supplement to a Macbeth unit I teach.

I love seeing some of the events and places you visit in New York. I live in a much smaller city, where we have a good arts community, but nothing that compares to New York. Thanks for sharing your experiences.

If you’re ever interested in seeing small town arts events and news please check out my site at noahwayblog.com.