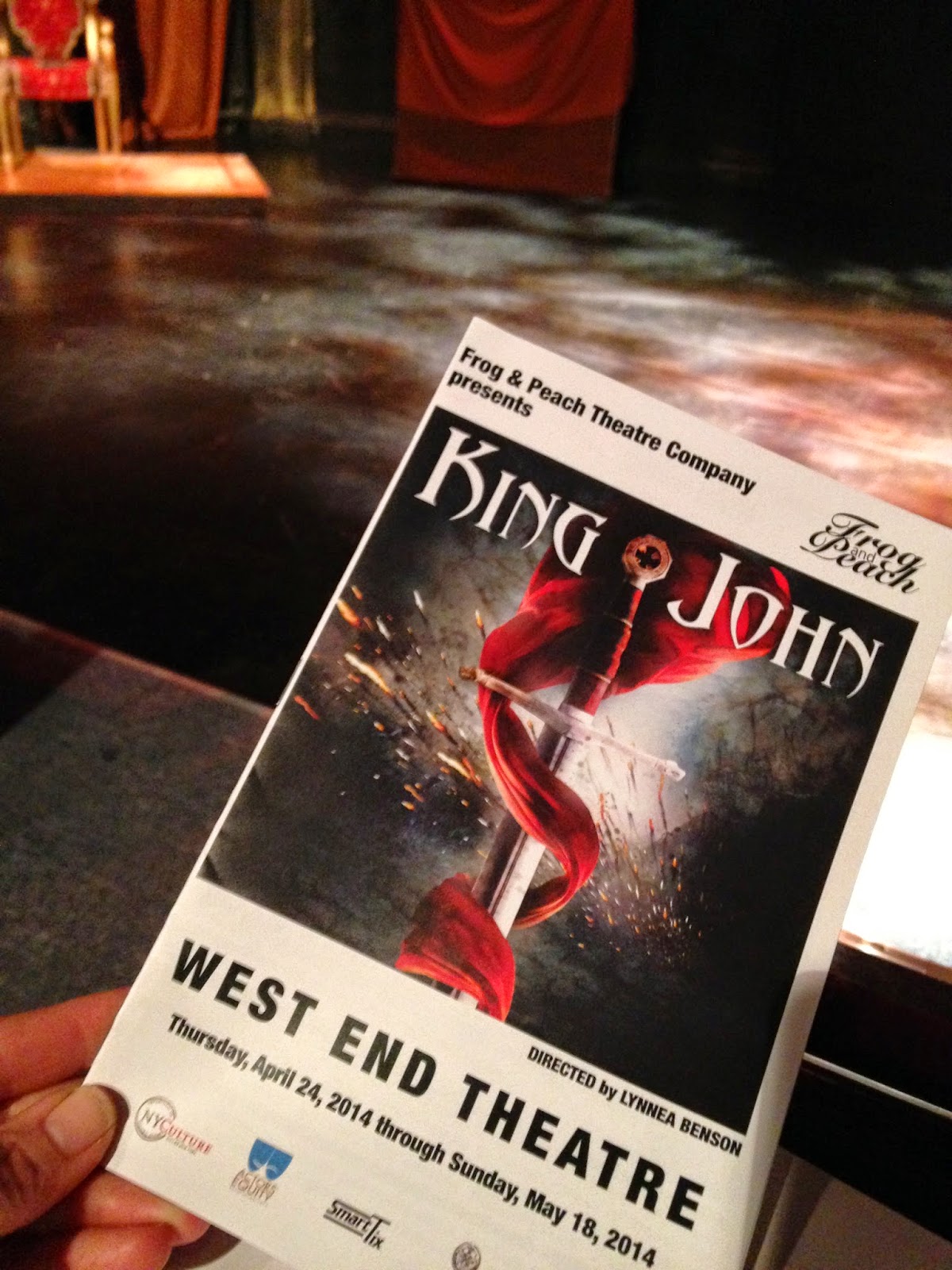 There's a marvelous production of "King John," one of William Shakespeare's rarely seen "History Plays" on through May 18th by the Frog & Peach Theatre Company.

As is custom, director Lynnea Benson has employed a most talented company of Shakespearean actors to bring the history of King John to life.  Intimate and accessible, this royal family drama comes alive cleverly and concisely.   Some of us only know King John as the tyrant foiled by Robin Hood.  This play tells the rest of the story:  adultery, claims to the throne, illegitimacy, wars, crazy mothers...Eric Doss as King John brilliantly plays the mama's boy ruler who takes the throne only by default after the adored Richard the Lion Heart dies in the Crusades.  It's fun to see him pouting and grasping at power.  Joining him as Queen Mothers are the wonderful Karen Lynn Gorney and Amy Frances Quint.

Having seen Miss Quint in a number of Frog & Peach productions, I was blown away by her mature and intense performance here as Constance, the mother of a would be successor to King John.  Her grasp of the text was powerful indeed.   She teeters on the edge of desperation and sanity and is perfectly cast.

Completely enthralling was newcomer Luke Edward Smith as the Bastard of Faulconbridge, dubbed Richard after his resemblance to Richard the Lion Hearted.   Mr. Smith hails from Sydney Australia and has the richest, most pleasing voice I've ever heard (I want him to read everything to me all the time).

David Elyha steals scenes as scheming, red sock wearing Cardinal Pandulph - his deliverance as the conniving man of the Roman Catholic Church during the time of the Crusades brings chills.

Another Frog & Peach newcomer is Randy Howk as Hubert.  He is the antidote to the Royal madness and brings beautiful calmness and confidence to the stage.

The Frog & Peach Theatre Company tags itself as "Shakespeare Revisited." Indeed with rock music setting the mood before curtain and during the intermission, simple sets and a cleverly designed mesh of modern and period dress (Nina Vartanian for costumes), this production, as well as all of the Bard's works I've seen this company do, has a very satisfying, kick-ass modern feel.   I go in expecting to be treated to really hearing and being in the text and I'm never disappointed.

"King John" runs to May 18th at the West End Theater, 263 West 86th Street (upstairs at the Church of St. Paul and St. Andrew).  Tickets will run you less than a movie in Manhattan and will be infinitely more satisfying:  $18!   Seniors are discounted with code ELINOR and students are discounted with code HUBERT for just $12 bucks through May 11th.     Ring the Smarttix box office at 212-868-4444 or purchase online at www.smarttix.com. 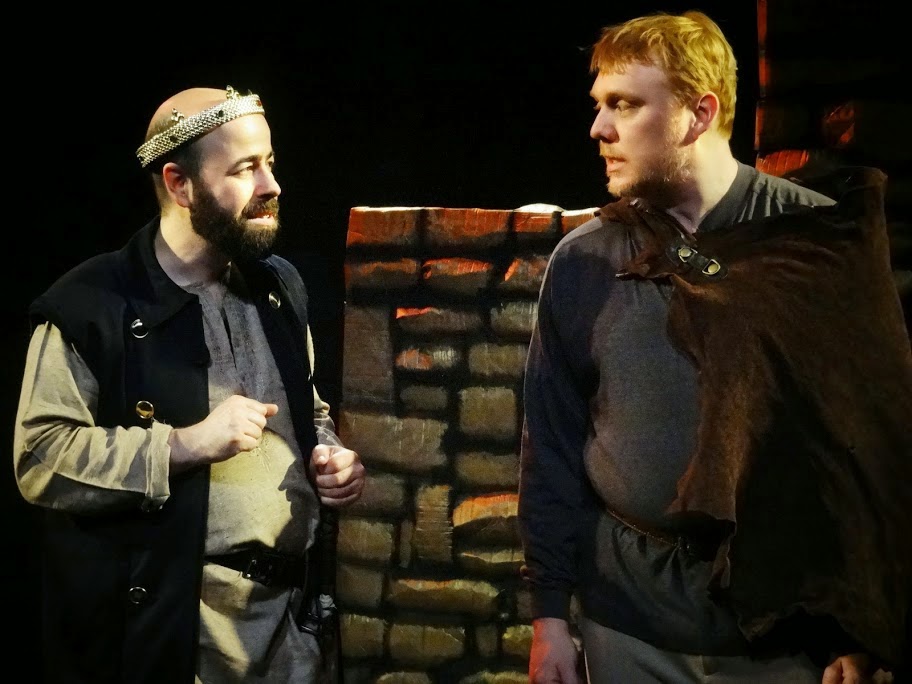 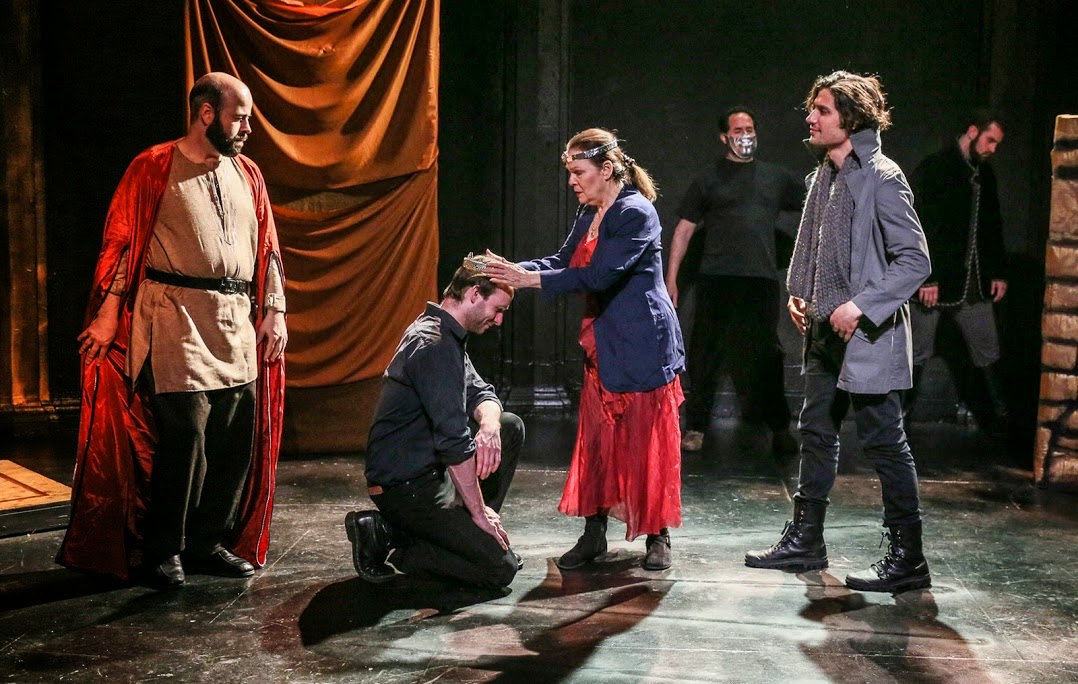 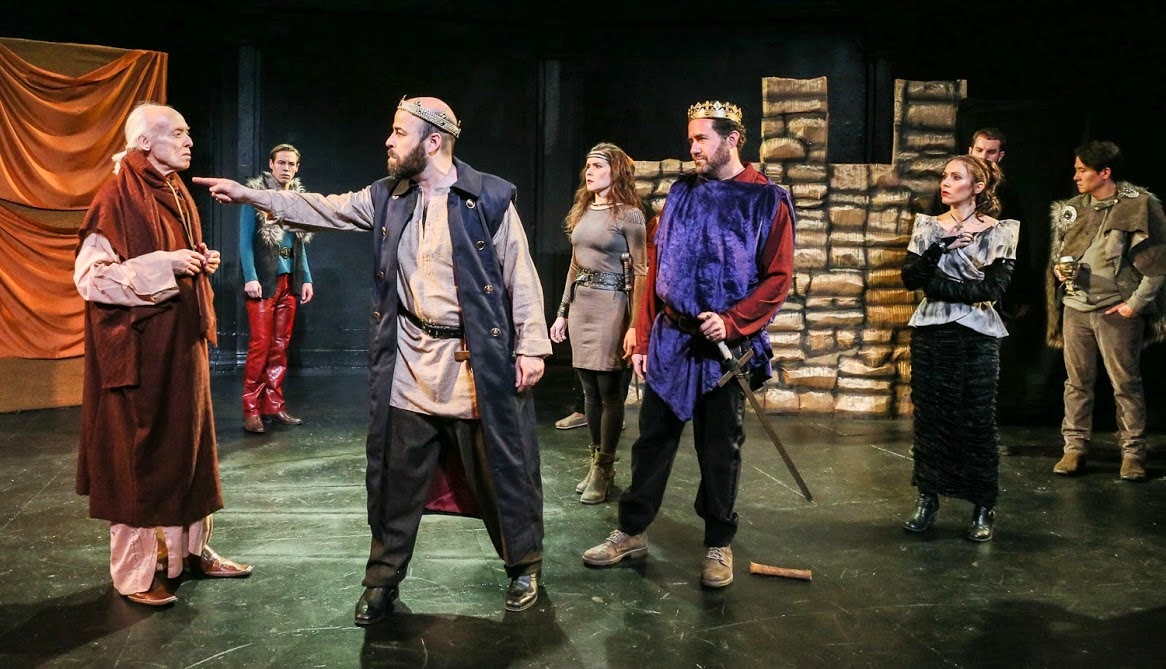