Get well Angie; A tradition ends 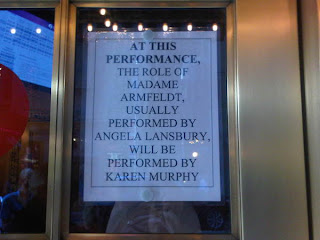 Every year, on the First Tuesday after the Tony Awards, I see a Broadway show.  Last night, the tradition broke.  Despite the Tony for Best Actress in a Musical going to A Little Night Music's Catherine Zeta-Jones, I didn't want to see it without Angela Lansbury.

Angela called out sick for the first time since returning to Broadway in 2007 ( and possibly ever).  The house manager and her minions were shouting over and over to disappointed patrons in front of the Walter Kerr before the 7:00 pm curtain that Angela is suffering from laryngitis.  I guess she screamed too much for Green Day at the Tony Awards before collecting her own citation as the very first Honorary Chair of the American Theatre Wing.

Fortunately, refunds and/or exchanges were given out.  Of course, an exchange might  not be possible - Angela and Catherine's last day is Sunday.  Oh well, I survived and went on to enjoy dinner and a nice Queen size pint of Blue Moon at Angus McIndoe's.  Mostly, I just hope for Angela to get well soon so she can happily enjoy the final days of her run and then a much deserved vacation (before she returns to Broadway!).
at 5:07 AM

Email ThisBlogThis!Share to TwitterShare to FacebookShare to Pinterest
Labels: A Little Night Music, Angela Lansbury, First Tuesday after the Tonys

Get well, Angela! We love you!