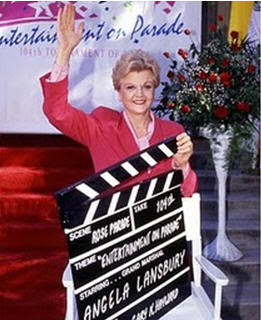 Over the past few weeks, the writers of Modern Family and 30 Rock have included Angela Lansbury in their dialogue - not actually her, but have invoked her good name.

1. "Oh please, where was all this conscience when I got us into the first-class lounge in the airport and you chewed Angela Lansbury's ear off." –Mitchell to Cam

2. Phil: "We got our butts kicked by Penn State. Angela Lansbury was the grand marshal. Good times she wrote." (yes, she was the Grand Marshall of the Tournament of Roses Parade in 1993)

And on 30 Rock, from guest Queen Latifah, playing a congresswoman - she says this at a hearing regarding the network merger:

3. “When people think of T.G.S., they think of Tracy Jordan, Jenna Maroney, the mysterious crew deaths, the Angela Lansbury lawsuit…”

We already know 30 Rock loves certain other octogenarian - couldn't you use the Real Angela Lansbury on your show?
at 6:00 AM

There's also a great sequence in which Angela Lansbury is prominently discussed in the film Men Who Stare At Goats and that was based on a true story!!