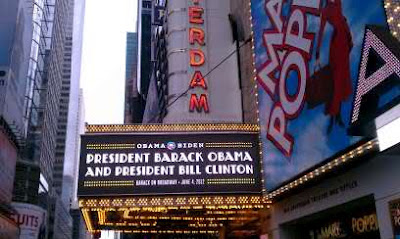 Last night I attended the presidential re-election campaign fundraiser for President Barack Obama, billed as Barack on Broadway.   The headliner of course was President Obama, but I was initially drawn in by the chance to hear President Bill Clinton speak again, as well as the promise of a Broadway concert at the New Amsterdam Theatre on Broadway.

The ticket prices ranged from $250 to $1,000, the latter of which included a special reception.  I only splurged on the former and it was absolutely enough for a very exciting and satisfying evening.

I received instructional emails which included an option to pick up my ticket in advance at the campaign headquarters on 5th Avenue at 27th Street.  I chose this option because I had never been to a presidential campaign headquarters.  It turned out to be only an empty office with volunteers handing out tickets to attendees.  I received additional instructional emails regarding where to que for the theatre and what not to bring.  The list of what not to bring was long, some standard (no weapons of any kind, of course) and some a little ridiculous- no coolers, no laser pointers, animals and umbrellas - but I guess they have to cover the bases.

Because the ticket indicated 7:00 p.m. curtain, I arrived extra and unnecessarily early.  But it allowed me to chat with a few supporters in line and enjoy a restful time in my seat S21 of the orchestra (great seat!).  I enjoyed the hustle and bustle of volunteer staff, paid staff, police, and Secret Service agents.   Finally, at 8:00 p.m., the big donors shuffled in loudly and somewhat obnoxiously, and  slowly took their seats.   My level of impatience and anticipation was near the explosion point by now!

When the curtain finally went up, there was Patti LuPone, who brilliantly sang "Everything's Coming Up Roses!"  What a way to open the show!     She was followed by "welcome" who turned out to be Neil Patrick Harris.   He talked about highlight changes we've seen over the last almost four years - end of war in Iraq, end of Osama bin Laden, economic growth, repeal of Don't Ask, Don't Tell in the military, and of course, President Obama's support of marriage equality.

Next on the bill was a "Marriage Medley" performed by Megan Hilty and Cheyenne Jackson.   The very cute and well done medley included "Marry the Man Today," "Old Fashioned Wedding," "Married," and "Marry Me a Little."   It ended with Nina Arianda and Bobby Cannavale each carrying a floral bouquet on stage, she joining Megan and he joining Cheyenne.   It was great fun.

Next on was Angela Lansbury, wearing the gorgeous red dress she wore to the Tonys, looking lithe and youthful. She strode all the way across the stage unaided by the cane she's been carrying as of  late.   The applause was long and appreciative and all she had to do was just stand there.   She read a speech, that she said she had a "hand in," that drew on imagery of the presidency and theatre.  She said she couldn't wait for Act 2 of President Obama's presidency.

Then Mandy Patinkin took the stage and offered a contemplative and hopeful rendition of "Over the Rainbow" with only piano accompaniment.   He ended the final verse with a we instead of an I  - "And the dream that you dare to, why, oh why can't we?"  It was lovely, indeed.

Next was a reading of "America Sings" which was a compilation of writings by various individuals, including Whitman, Twain, Toni Morrison, Wilder, Jefferson, Washington, Hammerstein, Updike, Steinbeck, Edison, Lincoln, Roosevelt and others.   It was read by Nina Arianda, Bobby Cannavale, Stockard Channing, James Earl Jones, Hettienne Park, Patrick Wilson, and Jeffrey Wright.  The actors sat on stools in a long row and read from scripts on music stands.   It was exciting to see them all there and the readings were a mix of poignant, profound and funny.

Chuck Cooper then took the stage with "Let It Sing," by Jeanine Tesori and Brian Crawley, followed by Norbert Leo Butz with "She Likes Basketball."    Chuck played harmonica and soulfully danced around the stage, captivating with his gorgeous deep baritone.   Norbert was on crutches, with a broken ankle.  He talked about sharing his love of basketball with President Obama and changed the lyrics of the tune to  my president and he.  It was great fun and he did a dance break with crutches choreography.

Audra McDonald entered and asked Patti LuPone to join her.  Audra was slated to sing "First You Dream" by Kander and Ebb, but instead she and Patti sang the duet "Happy Days are Here Again."  It always fun to see them to this, and clearly they love singing it together, although it didn't have quite the emotional punch that we would have gotten from Audra's thrilling mezzo with "First You Dream."

Tony Kushner followed this duet by reading an essay that he had written for the occasion.   It was a million brilliant, funny, audacious and true words crammed into five minutes.    I wish I could remember the words and hopefully it will be published because he did steal the first act, hands down.  He had us all agreeing and cheering and I, for one, wanted even more from him.

The Act 1 finale came with Kerry Butler and the Barack on Broadway Ensemble performing Stephen Sondheim's "Our Time" from Merrily We Roll Along.  It was a good way to get ready for the evening's big second act.

After a short intermission, finally here came the real stars of the evening.   First President Clinton took the stage.  It was thrilling seeing him speak again, this being my third time since his first presidential campaign, and frankly there will never be anybody better at public speaking in my opinion.   He spoke about President Obama, the nation, what we've done and what we must do.  His bottom line, "I don't think it’s important to reelect the President; I think it’s essential to reelect the President -- if we want this country to go in the right direction."

President Obama then joined President Clinton to address us.  I think it was a standard stump speech, but he did say it was good to be back on Broadway (there was a similar fundraiser in 2007; in 2008, there was a Broadway for Change concert also headlined by Audra McDonald, which Noah and I attended).  He added, "let me thank my producer [Margo Lyon]. That’s usually what you do when you’re on Broadway." He went on to tell a very funny story about Margo, who has produced many Broadway shows, sending him a fake mustasche so he could take a walk in disguise in Central Park.

President Obama had us in his hands with highlighting the good that has been done and what we still have to do and how we can do it.    I appreciated his and President Clinton's remarks about the automobile industry being "saved by a financial agreement that had management, labor and government restructuring the company."  I wanted to shout out for my bosses in the work that they did (and yes, I worked on it too) for General Motors.

I also very much appreciated President Obama's stump for healthcare:   "We’re not going to go back to the days when somehow women couldn’t get the preventive care that they need. We don’t need a situation where women aren’t controlling their own health care choices. We don’t need to eliminate Planned Parenthood. I want my daughters to have the same opportunities as my sons. That’s part of what America is about. We’re not turning back the clock. We’re not going backwards."

Both speeches by President Clinton and President Obama are on the official White House website.  To read, click here.

For Act 2, most of the performers positioned themselves in two of the boxes on the right of the proscenium .  I loved the juxtaposition of these actors- Cheyenne, Megan and Audra sitting in a row, behind them Patti sitting on Mandy's lap while Stockard was propped up behind them; Bobby, Nina and Kerry, et al. sitting together in the rear box .  All different in their craft but united behind President Obama.

Seeing one president live and in person is exciting but seeing two is experience that I don't know I'll ever have the chance to repeat.  Before I went in the theatre, I talked to my 7 year old niece Cara who wanted to know what I was up to.  I told her that I was going to see President Obama at a concert.  She said, "Barack Obama?  The President of the United States of America? Wow."   She sounded in awe, and frankly, I was in awe myself. 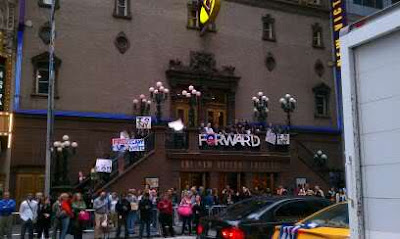 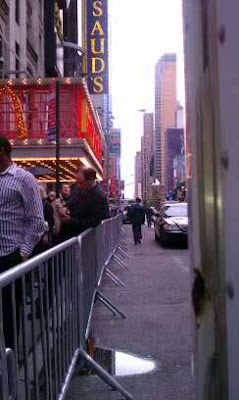 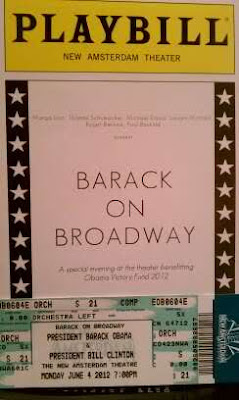 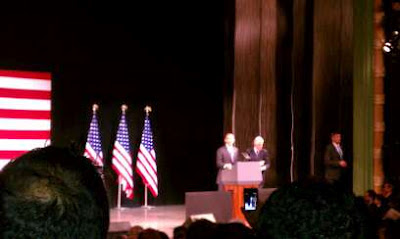 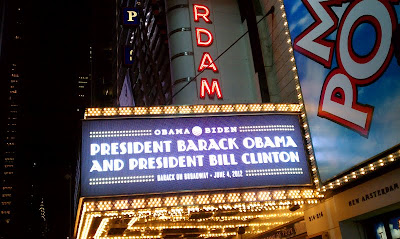 Wow, thanks for a great recap! Sounds like it was definitely worth the splurge.

I was at Bill Clinton's first inauguration. That's the only time I've seen a president and I was very far away. It was thrilling to be there but a lot of standing around in the cold!